Explainer: How was a pig’s heart implanted in a human and why is the world eagerly waiting for its result? 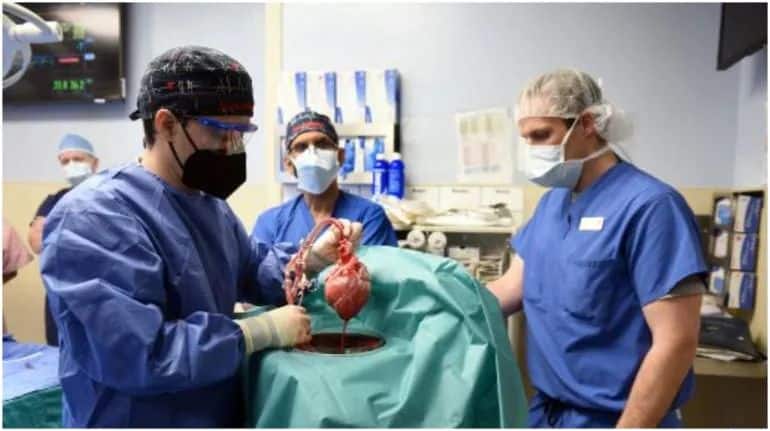 In America, doctors have set a record by transplanting a pig’s heart into a human. It is being said that such a bold experiment has been done for the first time in the field of medical science. If this clinical experiment proves successful, it could open up possibilities for the millions of people who have long been waiting for a healthy organ to be transplanted.

The procedure adopted in this surgery has been imagined for a long time. Even several mythologies, including the wings of the Greek god Icarus and the trunk of the Hindu god Ganesha, speak of the successful extradition of animal parts to humans. However, until recently, implementing this idea was a difficult task.

In such a situation, the eyes of the medical world around the world are now fixed on this surgery. If this operation is successful, it could reveal how a human body can be prepared to adopt an animal part. However, in the meantime, many questions are emerging about this surgery. Let us know the answers to all these questions one by one-

In which person is the heart of a pig implanted?

This medical experiment has been done at the University of Maryland Medicine (UMM) on 57-year-old David Bennett of America. David Bennett has many serious diseases, due to which he could not have a human heart transplant. With no other way to save his life, doctors decided to transplant a pig’s heart into him.

According to reports, the doctors performed the transplant on January 7 as a last attempt to save his life. Before transplanting, doctors had taken approval from the health authorities of America. The hospital said that when there is no option other than medical use to save the life of the patient, in that case, prior approval of the health authorities has to be taken before treatment and they have to explain the situation.

According to the report, Bennett’s condition was very bad, due to which he cannot be transplanted into a human organ. Before the transplant, Bennett said in a statement, “It was kind of a do-or-die situation. I wanted to be alive. So I decided to have this transplant. I know it’s like shooting an arrow in the dark.” But I’m ready for it.”

The University of Maryland Medicine (UMM), where it was transplanted, said in a statement issued on January 10, “This heart transplant has shown for the first time that the heart of a genetically modified animal can be transferred to the human body. Doesn’t reject instantaneously and it can work towards a human heart.”

Is the patient recovering after the transplant?

According to a statement released from the hospital three days after the surgery, Bennett’s body is still responding well. However, doctors also said that it is too early to call this transplant surgery successful. Doctors said that how the patient’s body is reacting to the new organ is being continuously monitored.

Before the operation, Bennett spent several months on a heart-lung bypass machine. Although doctors say he is now able to breathe on his own, he is still attached to the device so that there is no pressure on his implanted heart. Doctors said the next few weeks would be crucial for Bennett and after that the operation could be declared a success or a failure.

Paytm should be compared with Bajaj Finance: Vijay Shekhar Sharma

Dr. Bartley P. Griffith, who was on the team of doctors who performed the pig heart transplant in Bennett, said they were “proceeding carefully.” However, he expressed hope that this surgery will provide a new treatment option for patients around the world. Muhammad M Mohiuddin, Professor of Surgery at UMM, said that “the surgical procedure has been successful and has provided the medical world with valuable information to help improve this potentially life-saving method in future patients.”

How can such a transplant help humans?

The process of transplanting animal organs is known in the medical world as xenotransplantation. It has been used for a long time in modern medical science. However, often the human immune system was unable to accept it after transplanting a part of another organism and the challenge that arose after that, it was difficult for experts to overcome. Sometimes its result proved fatal for the patients.

The University of Maryland Medicine (UMM) reported that mass animal organ transplants were abandoned after a 1984 case involving a patient named Stephanie Fay Beauclair. In California, Stephanie Fay Beauclair is also known as Baby Fae. Baby Fay had a fatal heart ailment when she was born. Doctors followed the procedure of xenotransplantation for his treatment and his baboon (a kind of monkey) heart was transplanted. However, within a month of the operation, Baby Fay’s immune system rejected another organism’s heart and died.

Reports suggest that various animal skin applications have been used to treat superficial wounds since at least the 1800s. However, achieving success in transplantation of complex organs has always been quite complicated. This is the case when a pig’s heart valve has been used “for many years” for valve failure in a human heart.

A tragic case of organ transplant is related to a group of 13 individuals who had a kidney transplant from Chippenzie in 1960. Of these, 12 patients died within a few weeks of kidney transplant, while one patient died after 9 months.

UMM Professor Muhammad M Mohiuddin is counted among the world’s leading experts in animal organ transplantation. He explained that Bennett’s surgery “is the result of years of tireless research to improve animal transplantation techniques. The research has apparently been aimed at saving human life for more than 9 months.”

UMM reports that more than 6,000 patients die each year in the US alone while waiting for organ transplants. Griffith said that if this surgery is successful, it could bring new hope to the lives of patients who have long waited for human organs to be transplanted. This is because winning patients need heart transplant, that number of human beings are not present to give heart.

Indeed, for a long time it was believed that a pig’s heart was suitable for transplanting a human heart. But pig cells that had a sugar cell called alpha-gal. He was in danger of being rejected by the human body. In such a situation, to solve this problem, the pig was genetically modified so that it does not produce this particular cell. “With this surgery, we have gone one step closer to solving the problem of limb deficiency,” said Dr. Griffith.

Strict action should be taken against those responsible for disturbances in PM’s security system: Mahesh Landge

Now you will be able to do shopping from Amazon by speaking ,, this way this feature will work, know everything

Realme 8 5G smartphone features leaked before launch, know what will be special in this phone?