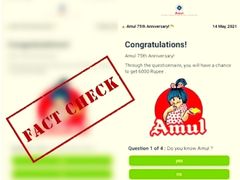 In today’s time, as the world is becoming increasingly digital and technology is increasing, the cases of cybercrime and digital fraud are also increasing. Every day there are many such messages on someone’s phone or Whatsapp, which first lure you with money, but later it turns out that you have been a victim of such a fraud, which you cannot even detect. Something similar is now being done in the name of Amul, a big and well-known company of the country. If you have come across a link on WhatsApp to someone you know or in any group, in which it is being said that you will get 6000 rupees, then you should be careful.

What’s in the link?

In fact, one such link also came to us, on clicking on which you reach a website. Amul’s logo is at the top of the page. It is written below “Amul 75th Aniversary” and on going down “Congratulation” is written in big letters, below which a line is written – Through questionnaire, you will get a chance to get Rs.6000.

Below this 6000 rupees lure line, you will see a question, as soon as you answer it, you will be asked three more consecutively, after which 9 boxes will be made on your screen, which are designed like the logo of Amul. In this you will be given 3 three chances to click any one box and if you click the box, you will win Rs.6000…

But all this does not end here, the biggest game of this fraud is that you will get this 6000 rupees when you share this link in your 20 friends or 5 WhatsApp groups.

The interesting thing is that some low comments have also been shown in this, in which many people wrote that they got 6000 rupees, someone wrote this campaign method is very good. This entire site is designed in such a way that any educated person can be deceived at first.

But now the question arises that this whole matter is related to false and fraud, how it came to be known. Amul himself has tweeted the answer to this. Amul wrote in a tweet, “Continued by Amul in public interest.”

The company also wrote a message with this, “This information is for your information that a fake message is being shared on Whatsapp and other social media with a SPAM link. You are requested to please do not click on this link. “

It further read, “We also want to inform you that Amul is not running any such campaign. Share this message with your friends and family as much as possible.”

What do the experts say

Ecyberplanet quoted its cyber experts as saying that this link contains a virus and it could be a scam, where fraudsters may be looking for your money, personal data or other details. When he checked the address of the link, it was found that it is not from the official website of Amul.

Hackers can also use it to install malware or viruses on your phone or computer. If you receive such a message from an unknown number, report it as a scam on WhatsApp and block it.

During the Corona period, the banks of the country became rich, from SBI to these banks made huge profits

China, which is putting tension on LAC, is now giving ‘knowledge’ to India, said this about the border dispute