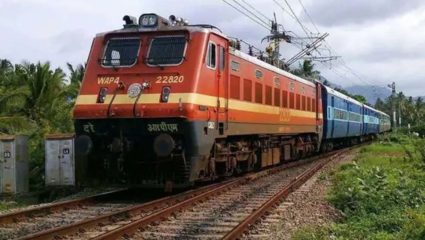 Nagpur. A memorandum was submitted by the BJP Minority Front to the Additional Divisional Railway Manager of Central Railway Nagpur Division to restart the Nagpur-Ajmer-Nagpur Express, which was closed due to the nationwide lockdown. The delegation led by MLA Vikas Kumbhare said that the said train is not only related to transport, but it is also related to religious sentiments.

Apart from Ajmer Urs, this train is very useful for most of the citizens of the city to visit most of the religious and tourist places of North India. Earlier it used to run from Nagpur every Thursday in a week but since the lockdown all the trains have been regularised. Despite this, till now no decision is being taken to run the Nagpur-Ajmer-Nagpur Express again.

Kumbhare said that connecting the use of the said train only to the residents of Nagpur would be a limited approach. This is a train connecting the whole of Vidarbha with Ajmer Sharif. Sufi Saint Hazrat Khwaja Moinuddin Chishti R.A. is a follower of. Urs is to be held at his dargah in Ajmer next month. Apart from Vidarbha, people from many cities of Madhya Pradesh and Chhattisgarh come to Nagpur to attend the Urs, but thousands of followers are facing huge problems due to the closure of direct train service.

The delegation informed that people have to travel much longer time due to running this train from Nagpur, Bhopal, Kota to Ajmer route via Chittorgarh. After hearing all the demands, ADRM assured a discussion with the senior officers regarding this. During this, apart from Kumbhare, city president Farooq Sheikh, Firoz Sheikh, Rashid Qazi, Sahab Khan, Amani Qureshi, Uber Joz, Wasim Ansari etc. were present in the front.

World’s Oldest Whisky on Sale: This is the world’s oldest wine, you have a chance to buy it, know the price

What is Paytm service agent’s business? Know how to become an agent?