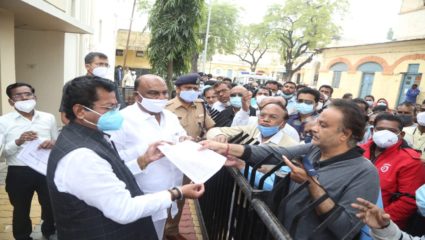 Yavatmal, On January 11, Dr. Hanumant Dharmakare, who was working in government service in Umarkhenu, was shot dead by an unknown person with a gun, this incident is quite outrageous. In this way, this incident of murder by killing a doctor is going to harm the administration and the law and order of the district.

So that the killer of Dr. Dharmakare should be arrested immediately, such a demand has been made by IMA Yavatmal and Magmo organization of doctors. Today, on January 12, both the doctors’ organizations submitted a memorandum to the foster minister of the district, Sandipan Bhumre, in which action should be taken to arrest the accused immediately and give him strict education and justice was demanded for the relatives of the deceased doctor.

After the murder of Ashok Pal, a final year student of MBBS course in Yavatmal Medical College last month, the incident of murder of a doctor in Umarkhed has created fear among the doctors and the people of the medical field, government service officers taking their lives on the palm. are working.

After the incident in Umarkhed, all the doctors and medical officers there stopped work, expressing prohibition of the incident, for not arresting the attacker within 24 hours, yesterday on 13th January in the entire district and then across Maharashtra by doctors on behalf of IMA. There will be a work-off movement, such information was given by the former state president of IMA, Dr. T.C. Rathod in Yavatmal today.

We have taken stock of the entire incident in Umarkhed, the attacker will be taken into custody after conducting an immediate inquiry, action will be taken to make concrete arrangements for such incidents not to happen again, while accepting the memorandum, the Guardian Minister told the delegation Apart from this, during the DPC meeting held today, MLA Dr. Sandeep Dhurve raised this issue and demanded immediate arrest of Dr. Dharmakare’s killer and a measure plan for the safety of doctors.

In the present situation, incidents of deadly attacks on doctors are happening, for the last few years, the Indian Medical Association has made many agitations by bringing these incidents to the attention of the government, the government made laws to stop attacks on doctors, but it is not implemented. IMA has always agitated so that these laws are more stringent and the accused are punished as soon as possible. Raise such a demand, IMA.

Azim Premji’s companies, who are called Danveer, got Rs 18000 crores in 5 years, this is how big money earned

Schools Reopen: Schools and junior colleges will reopen in Mumbai from October 4 after 1.5 years