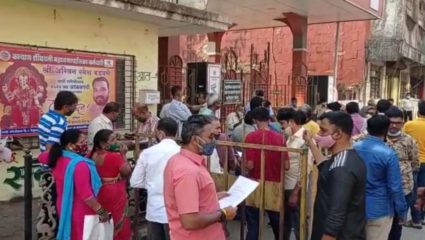 Welfare : The affected citizens of Kalyan East have demanded extension of time for hearing of U-type road widening in Kalyan East on behalf of Rehabilitation Work Committee Kalyan East. It is a U-type road from Katemaniwali Naka to Ganpati Chowk, Siddharth Nagar, Mhasoba Chowk to Tisgaon Naka in Kalyan East. In the general meeting of October 2020, it was decided to widen the road to 24 meters. In this 1600 houses and shops are completely affected.

In the year 2000, 22 houses were demolished in this road widening, none of them have been rehabilitated yet. These citizens are waiting for rehabilitation for the last 21 years. The citizens of Kalyan East U Type Road have been accused of giving 80 feet clearance for the benefit of land mafia, developers and land owners. During the COVID period, an attempt has been made to shorten the 40 feet road to 80 feet by giving short notice in collusion with the municipal officials and land mafia in Kalyan East.

A complaint was lodged against the Municipal Commissioner in the police station.

When a notice is expected to be given within 15 days, the hearing has been adjourned for only two days during the COVID period. Efforts are being made to bring about 1800 people on the road. The Municipal Corporation should extend the time limit for attending the hearing. Citizens obstructing this road demand that at least 15 days notice should be given in advance. Due to the sudden release of this notice, there is panic among the people. Former corporator Uday Rasal told that a complaint has been lodged against the city planning director and Kalyan-Dombivli Municipal Corporation commissioner at the police station.

The owner had already bought three cars worth Rs 2.66 crore, the ash burned in the fuel station

Income Tax Return: Check this important document before filing income tax return, it will be easy in ITR filing

On completion of two years of abrogation of Article 370, Pakistan again raged on Kashmir, Foreign Minister Qureshi wrote a letter to the United...