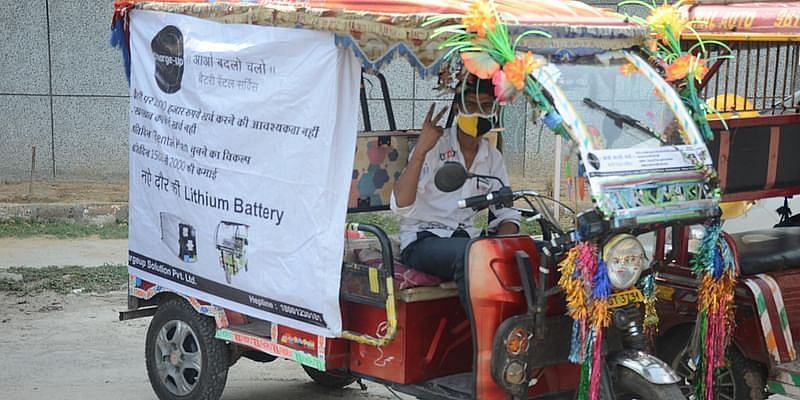 Today when it can be difficult to predict what the future holds, but one thing is certain that it will move towards electric. Many countries are now moving towards an all-electric transport infrastructure, in which India also has an electric vehicle (EV) policy. With EVs gaining popularity, improving infrastructure has become the most important aspect of the industry.

E-ChargeUp, a Delhi-based electric mobility startup established since 2019 to impact the 2.4 million livelihoods associated with the e-rickshaw community, aims to provide quality charging infrastructure across the country and create a network of battery swapping stations.

“I have been fond of the clean-tech space. I have experience working in the clean-tech and mobility space and I am really excited to see the social and environmental impact that it creates.”

E-rickshaws come with major hurdles, some of which include 10-hour charge time, limited revenue and investing in expensive new batteries. This has become an opportunity for e-ChargeUp to offer battery technology on its platform and ensure that drivers make money.

“In this industry you need to build battery technology and benchmark best practices in SOP to build integrated IT infrastructure for efficiency. This will allow an ecosystem for battery swapping to flourish. In the current scenario where Electric three-wheelers and two-wheelers are growing rapidly, with quality infrastructure becoming the need of the hour. Our focus in this area is to build a reliable and robust infrastructure. “

Varun graduated in Commerce from Gauhati University in 2005. He later became the CEO of Atlanta Energy for seven years and joined, where he learned how renewable energy could be used to power batteries.

An e-rickshaw driver takes the stage for a daily battery rental plan and visits the station two to three times a day to swap with the charged battery, which is provided by the e-ChargeGap . “We have helped him increase his daily earnings from Rs 850 to Rs 1,800 and the number of kilometers per day from 90 to 160,” says Varun.

Startup batteries are light – weighing less than 30 kg. It purchases batteries from a startup called Green Fuel. It also produces software and deploys it to Energy Pods where the rickshaw owner takes the battery and swaps. This mechanism is similar to the platform provided by Sun Mobility.

The startup offers a rental battery with a two-minute swapping facility, where e-rickshaw drivers pay a daily fare on each swap. Currently they have three battery swapping stations in Delhi, Noida and Gwalior with a total monthly swap number of over 1,150.

The USP of e-ChargeUp is to provide a charging station within a radius of two km. The aim is to expand its scale, create a network of properly placed stations, work on structured finance, IT and IoT for seamless transactions and service.

“The company built the dealer model and pricing model from scratch, which took us time. However, we are now ready to take it to the next level.”

The startup has grown at a rapid pace, however, due to the outbreak of the COVID-19 stalled growth, during which its number swaps to 370 a month, now steadily increasing to 600.

To explain if the battery is fixed, all operating costs will be borne by the rickshaw owner. If they use a vehicle where the battery is replaceable, the cost of ownership is significantly reduced and they only have to pay for the battery exchange. The drivers have to pay 200 rupees for each swap.

The founder has so far invested Rs 1.2 crore in the business. The startup had a turnover of Rs 2 crore during the last financial year. The startup competes with Sun Mobility and Magenta Power.

According to SIAM, total EV sales in the country stood at 156,000 units in FY2020. However, the market is dominated by two-wheeler and three-wheelers.

Nationwide adoption of electric vehicles is mainly constrained by the cost factor.

According to the strategy consulting firm Cairney, the total cost of ownership to drive petrol cars is less than 50 km per day to drive an electric car. This is due to the high cost of batteries in overall vehicle costs. There will be challenges for this startup to win mass users across the country at the same time. Business requires significant capital. But the future lies in moving to electric as it reduces vehicle costs.

Despite the high cost, many states are insisting on adopting EVs. With the recently launched EV policy, the Delhi government aims to cover 35,000 EVs across segments and a five-year plan to introduce five lakh EVs on the road. The policy also recommends changing building by-laws to accommodate charging infrastructure in new homes and workplaces.

According to a report by Avendus Capital, the EV market could be around Rs 50,000 crore by 2025, with two and three wheelers being electrified rapidly due to COVID-19 disruption in the medium term. It is also stated that up to 40 percent of the e-rickshaw market is expected to shift to lithium-ion batteries.

WhatsApp will not work in these smartphones from November 1, if your phone is not included in the list, see

Gold Silver Price: Gold and silver prices declined on the second day of the week, know the latest price of 10 grams of gold