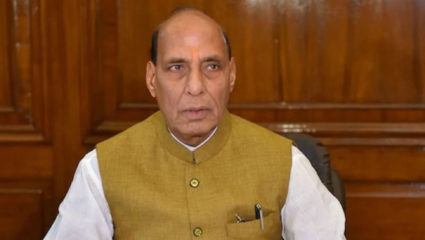 New Delhi: The health of Defense Minister Rajnath Singh infected with Corona virus is improving. A government spokesperson gave this information on Tuesday. A brief statement issued by the Defense Ministry said, “A team of doctors from the Army’s Research and Referral (R&R) Hospital, Delhi Cantt, conducted a health check-up at Singh’s capital residence on January 11. ”

The statement said, “The Defense Minister is in isolation at his home after being infected with corona with mild symptoms. According to a team of doctors, the health of Rajnath Singh is improving.” Earlier, Defense Ministry’s Principal Spokesperson A. Bharat Bhushan Babu had told that Singh’s health is improving.

Babu tweeted, “A team of doctors from Army Hospital (R&R), Delhi Cantt, examined the health of Defense Minister Rajnath Singh, who was infected with Corona virus. His health is improving.”

Greenery in the market before Holi, investors made more than 2 lakh crores in an hour and a half

Service charge and checkbook rules are changing in Bank of Baroda from November 1, know the details before transaction