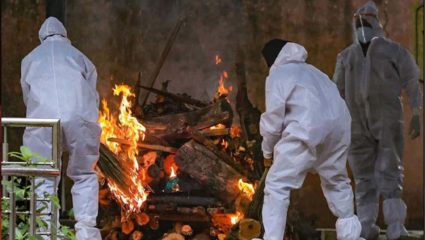 New Delhi: The attack of Corona continues in the national capital Delhi. In the last 24 hours, more than 20 thousand cases have been registered in the capital. At the same time, 30 patients have died. The infection rate in the city is 30.64%. This information is given in the statistics of the Department of Health

According to a release issued by the Health Department, 20, 718 new cases have been reported in the national capital on Saturday. After which the total number of active cases has increased to 93,407. The reason for the decrease in daily cases of infection is believed to be due to less investigation in the past.

Meanwhile, Delhi Health Minister Satyendar Jain on Saturday said that the national capital seems to have reached its peak in Covid-19 infections and the government will look at easing restrictions when the cases reach 15,000.

He said, “We can say that Delhi has reached a peak in terms of cases. Cases are starting to drop. Let’s see when the fall comes.”

Apart from this, 31 patients had died while the infection rate was 29.21 percent. Delhi had the highest number of cases of infection in a single day before Thursday, on April 20 last year when 28,395 people were confirmed infected.

Listen to our government too, women are risking their lives for drinking water in Trimbakeshwar