Stock Tips: This share of banking sector can generate bumper earnings, may rally by more than 25%, know target price 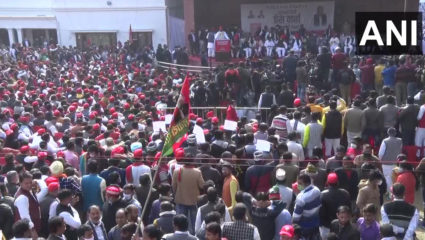 Lucknow: In Uttar Pradesh, while the increasing cases of corona are continuously increasing. On the other hand, the campaigning for the assembly elections is also gaining momentum. In this sequence, a virtual rally of Samajwadi Party supremo Akhilesh Yadav was organized today. In this rally of Akhilesh, all the common rules were flouted to prevent corona virus. Thousands of people gathered at the same places without wearing masks. After which the District Magistrate has ordered an inquiry.

In fact, a virtual rally was organized to get the supporters of the MLAs including Swami Prasad Maurya, a former leader of the Bharatiya Janata Party and a minister in the Yogi government, to join the Samajwadi Party. In this rally organized at the residence of Akhilesh Yadav, thousands of supporters of SP and Swami Prasad Maurya reached. During this, neither did anyone wear a mask nor did anyone follow social distancing. At the same time, none of the leaders including Akhilesh present on the stage had put on a mask.

In this regard, Lucknow District Magistrate Abhishek Prakash has said that this program has happened without permission. On receiving the information, the police team along with the magistrate was sent to the SP office. On the basis of the report, the District Election Officer has directed to conduct an investigation as well as to get an FIR in this matter.

The responsibility of the people responsible will be decided

It is to be known that the Central Election Commission had recently announced the assembly elections in five states. In Uttar Pradesh, where voting will begin from February 10, the result will be declared on March 10. In the election to be held in the midst of the third wave of Corona, the Commission has banned any kind of campaign and rally till January 15. With this, if anyone violates these rules, action was ordered against him.

The Election Commission, in a meeting with the Ministry of Home Affairs before the announcement of the elections last week, had asked to ensure that the responsibility of the officers is fixed under the provisions of the National and State Disaster Management Act so that the corona guidelines are implemented in the polling states. to be strictly enforced.

Uddhav’s minister said – Policemen above the age of 55 will do work from home, said this about cinema hall and mall

10 Years RD: 10 thousand to be deposited in the post office every month, what will be found after 10 years

Russia: Small plane carrying 17 people missing in Siberia, Russian aeroplanes have been victims of accidents in the past