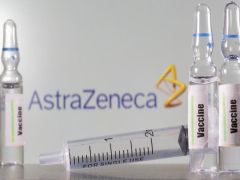 A new research by Oxford University has revealed that only one dose of the Oxford-AstraZeneca corona vaccine reduces virus transmission by 67 percent. At the same time, this vaccine is also playing a big role in preventing the virus from spreading. The Oxford-AstraZeneca vaccine was first approved by the United Kingdom in December 2020.

After the United Kingdom, the Indian government also gave permission for the emergency use authorization of the Oxford-Astrazeneca vaccine to fight the coronavirus. Currently, the Corona Vaccination Program (Vaccination in India) has started in the country and till now millions of people have been vaccinated.

The information provided by Oxford University suggests that the data show that reducing the number of infectives in the population can affect the spread of the vaccine virus. The research is being reviewed for publication in The Lancet. Research has also reported that a 3-month gap between two doses has also proved to be effective. A single dose of the vaccine has also shown 76% efficacy between 22 and 90 days.

Britain’s Health Minister Matt Hancock has said that this news about the Oxford vaccine is very good. Reduction in transmission by two-thirds, better safety due to 12 weeks difference in the dose and no hospitalization. This vaccine is working and doing well. Professor Andrew Pollard, the Chief Investigator and co-author of the Oxford Vaccine Trial, said that this new one gives the necessary verification of the interim data that more than 25 regulators, including MHRA and EMA, have used to allow emergency use of the vaccine.

Alert! Cybercriminals will clean your account with this WhatsApp scam, know how to stop it

Now you can buy any goods with cryptocurrencies like bitcoin, Amazon is going to start this facility soon