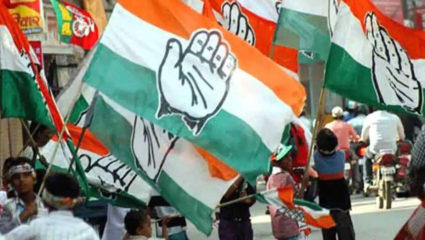 Panaji: The Congress and the Goa Forward Party (GFP) on Saturday announced an alliance for the assembly elections in the state to be held in February next year. It is noteworthy that earlier GFP had partnered with the BJP in power. But in July 2019, it withdrew support after three MLAs, including party president Vijay Sardesai, were dropped from the state cabinet. Sardesai was then the Deputy Chief Minister in the Pramod Sawant-led government.

All India Congress Committee (AICC) Goa in-charge Dinesh Gundu Rao told a press conference here that Congress and GFP have forged an alliance for the upcoming assembly elections in the state. “Vijay Sardesai (GFP President) met our leader Rahul Gandhi in Delhi and expressed his support for the Congress saying that he wants to work with us to defeat the communal and corrupt BJP government in Goa,” Rao said. So that change can be brought in Goa. We welcome his move.”

“There was more communication between the two parties in Goa. The minor issues which were between us were resolved and we are looking forward to a new beginning.” Rao said, “Whatever happened earlier, has happened. There is always a possibility of friendship, alliance in politics and we have trust and confidence in each other. “We are going together in the elections and we hope that this alliance will inspire more people to join the Congress,” the Congress leader said. I am sure that in this election people have decided to reject the BJP and they want a stable government in the state.”

Rao said that the details of seat-sharing would be given later. Speaking on the occasion, Sardesai said that this alliance will free Goa from the ‘autocratic’ government. “The present government of Goa is indulging in the politics of takeover and takeover which is poisoning democracy and a new movement needs to be started to make Goa free from BJP’s corruption, communalism,” he said.

Sardesai said like-minded people need to come together. “What started at Rahul Gandhi’s residence ended on this wonderful day,” he said.

One of the Ravens’ offseason wants is to accumulate cornerbacks. They made some progress on…

Purplle.com has launched its new marketing campaign, aiming to place itself as ‘Har Indian Ka…