Congress released the first list of candidates in UP, full of fighting women 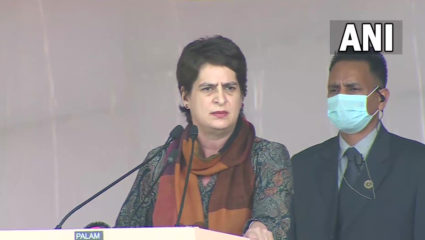 Lucknow : Priyanka Gandhi, who started Mission UP with the slogan ‘I am a girl, can fight’, has been the face of the movements in the first list of Congress candidates, has been a victim of harassment and has given a lot of place to the youth workers.

Be it Sadaf Zafar, a Lucknow woman activist who faced police repression in the CAA movement, Asha Singh, mother of Unnao rape victim, a woman harassed in Lakhimpur Panchayat elections or Alpana Nishad, who fought for Nishad in Prayagraj, Priyanka’s choice has become a ground struggler. . There are dozens of new faces in the list of Congress including militant youth leaders Anil Yadav, Lalan Kumar, Sagar Singh, whose identity is on the ground.

Congress has released the first list of 125 candidates for the Uttar Pradesh assembly elections. The party has said that 40 percent of the list is women and 40 percent youth. Congress general secretary Priyanka Gandhi Vadra had announced that the party would give 40 per cent tickets to women in Uttar Pradesh. The party has given the slogan ‘I will fight, I can fight’, which has become quite popular. Priyanka said that Congress has fielded such women, who struggled a lot, but never got a chance to contest elections.

Change is certain when the voices of struggle and making new politics come together.

Change is certain when we walk together with the determination to win UP.

The Congress has fielded Asha Singh, the mother of the gangrape victim in Unnao, while Ramraj Gond, one of the victims of the Sonbhadra massacre, has also been fielded. Similarly, Congress has given ticket to Poonam Pandey, who works as Asha sister. Similarly, Sadaf Zafar, who fought against CAA NRC, has been given ticket from Lucknow Central seat. The party has also fielded Supriya Aron from Bareilly Cantt, Pankhuri Pathak from Noida and Lewis Khurshid, wife of former External Affairs Minister Salman Khurshid from Farrukhabad.

Will stay in Uttar Pradesh even after elections

In a virtual press conference on Thursday, Priyanka Gandhi said that the efforts she has started in Uttar Pradesh will continue and she will remain in Uttar Pradesh even after the elections. He said that when Congress started talking of women, other parties also started doing the same. Priyanka Gandhi said that women cannot be ignored. Priyanka said that she will continue to work for the strength of the Congress. If our comrades retreat, we feel that they are leaving the path of struggle, he said.

Bank Fraud: If fraud has happened from your account then you will get full money in only 10 days, just have to do this...

Why include debt funds in long term portfolios? Emergency will work with emergency with tax benefits