Compassionately eligible candidates got appointment order, 73 compassionate holders had a pleasant last day of the year 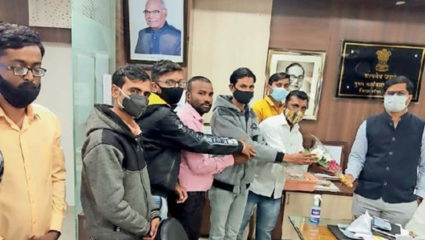 Yavatmal, The Zilla Parishad administration has made the appointment order of compassionate candidates very sweet at the end of the year. From the counseling held on Friday, December 31, in the presence of Chief Executive Officer Dr. Srikrishna Panchal, a total of 73 candidates were ordered through counseling.

The summary of the revised point list was approved by the Divisional Commissioner. Under this, the Zilla Parishad administration had started the process of appointment of compassionate candidates. The list of vacancies in various cadres for the year 2021-22 was published on the website of the Zilla Parishad on 13th December, subject to the approval given by the commissioner after inspecting the documents recently.

Meanwhile, on Friday, December 31, counseling was conducted in front of the Chief Executive Officer of the eligible candidates, Dr. Srikrishna Panchal. On this occasion Deputy Chief Executive Officer Arvind Gudhe, Cell Officer Bhimrao Rathod, Superintendent Suresh Chavan, Senior Assistant Ravi Chandak, Junior Assistant Atul Yelke and other officers and employees were present. According to this counseling, appointment orders were issued by informing the candidates about the vacancies.

This includes 43 attendants, 11 teachers, 13 villagers, 3 health workers, two junior engineers and one livestock supervisor 73 such people, after giving such appointment orders, some candidates thanked the CEO by giving them a bouquet of flowers. There is an atmosphere of happiness among the candidates after getting the appointment order on the last day of the year.

UK economy 'to be worst hit' of all G7 nations

Hand sanitizer becomes big business for entrepreneurs due to coronavirus

On the one hand, there is a state of panic among the people regarding the…

Ex-Team GB star died after being thrown from 'spooked' horse