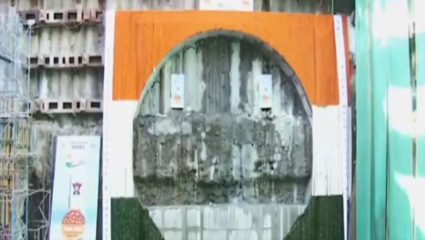 Mumbai: The important work of the second package of Coastal Road being built from Nariman Point in Mumbai to Bandra was completed on Monday. With this, the TBM Machine Mawla, engaged in the excavation of the 2.7 km long double tunnel, also completed the tunnel excavation work. This was the most important task of the entire project. Chief Minister Uddhav Thackeray was automatically present through video conferencing to see this moment. Congratulating the entire team involved in the construction of the Coastal Road, the Chief Minister said that on this day the work of tunnel construction started a year ago, which has been successfully completed. Even after the third wave of storm, rain and corona in Mumbai, the pace of work was not allowed to slow down.

He said that 55 flyovers were built in Mumbai during the Yuti government in 1995, but they are also falling short for traffic. The Coastal Road will not only change the face of Mumbai, but will also ease the traffic of Mumbaikars.

work will be completed on time

The Chief Minister said that the time fixed for the construction of the Coastal Road would be completed on time. He said that there will be no obstacle in the construction of this road. A large number of people had gathered to see the work of the last phase of the tunnel. Apart from dhol-tashe, arrangements were also made for flower showers on Mavla. The event was broadcast live on YouTube and was viewed live by 302 people.

Excavation of the first tunnel of Coastal Road from Priyadarshini Park towards Marine Drive was completed today.

Excavation of the 1st Tunnel from Priyadarshani Park to Marine Drive of the Mumbai Coastal Road is completed today!

Tunnel built 70 meters below the ground

There were two major obstacles in the construction of the tunnel. There is a reservoir of sweet water under the Hinging Garden, from under which a tunnel had to be made. Apart from this, there were many buildings in Malabar Hill, from which tunnels have been made. Both these hurdles were met without any damage. The tunnel has been built about 200 feet below 70 meters from the ground.

Vijay Nighot, Chief Engineer, Coastal Road Project, said that 200 tonnes of debris has come out in the tunnel construction, which was done to bridge the vacant space of Coastal Road instead of throwing it somewhere. The height of the TBM machine Mavla engaged in the excavation of the Coastal Road Tunnel is as much as a 4-storey building. It has a diameter of 12.19 meters and a weight of 2700 tons. The name of this huge machine was given by Aditya Thackeray. Two tunnels were to be constructed parallel to the Coastal Road with a length of 2.07 km, in which the work of one tunnel has been completed. The work on the second tunnel will start from April 2022.

About 25,000 ambulance employees throughout England and Wales will strike at present in a dispute…

Know About Life Insurance Corporation of India – LIC of India

Life Insurance Corporation of India or LIC has brought great news for the people. This…

Battenfeld: Democrats’ us vs. them strategy will come back to haunt them in 2024

BJP will take Mann Ki Baat to the people, arrangement of screens at 75 thousand booths and power centers