CM Thackeray was absent from PM dialogue, Rajesh Tope did not get a chance to speak 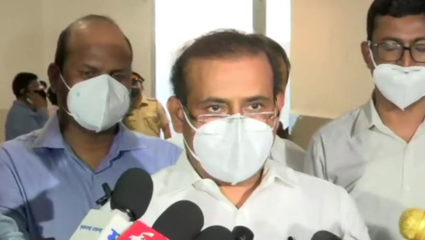 Mumbai: PM Narendra Modi on Thursday held discussions with the Chief Ministers of all the states through video conferencing with the heads of union territories to review the situation of Corona in the country. Maharashtra Chief Minister Uddhav Thackeray did not participate in this discussion due to his ill health. While in his absence, Health Minister Rajesh Tope was sent for a dialogue with the PM, but he did not get a chance to speak during the meeting.

However, he has put his demands before the Prime Minister in writing. Speaking to the media after the meeting, Health Minister Rajesh Tope said that only the Chief Minister was allowed to speak in the meeting. We requested that we should also be given an opportunity to present Maharashtra’s side, but due to not getting permission, we have put forward the demand in writing.

Why the Chief Minister did not join

When asked why Chief Minister Uddhav Thackeray could not attend the meeting. In response, Rajesh Tope said that the doctors told that sitting in one place for two and a half hours after the operation is not good for the health of the Chief Minister. So he decided not to attend the PM meeting.

Rajesh Tope said that I have demanded additional supply of Covaccine vaccines from the Central Government. He said that under the vaccination program of the Center, we have demanded to provide 40 lakh vaccines and 50 lakh covershields. Covaccine is in short supply mainly for people aged 15 to 18 years and over 60 and frontline workers.

Krsnaa Diagnostics IPO will open on 4th August, know how much one share is getting

US Election 2020: Bydette’s early lead over Trump, who’s ahead and who’s behind