Chandrashekhar Azad: Akhilesh insulted Dalits, there is no alliance with SP anymore, Dalit society will fight on its own 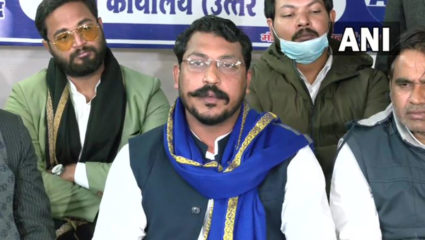 New Delhi/Lucknow. According to the big news of the morning, Chandrashekhar, President of Azad Samaj Party and founder of Bhim Army, told in a press conference today that there is no alliance between his party and Samajwadi Party. . In this regard, Chandrashekhar said that many issues were discussed with the Samajwadi Party. But now it did not matter.

Chandrasekhar also made it clear that, “Now even if the government is formed, our representatives will not be there. Akhilesh ji does not understand social justice.” At the same time, he said, “We have to stop the BJP at any cost. But Akhilesh ji does not need Dalits. Akhilesh Yadav has humiliated us.”

After all the discussions, in the end, I felt that Akhilesh Yadav does not want Dalits in this alliance, he just wants Dalit vote bank. He humiliated the people of Bahujan Samaj, I tried for 1 month 3 days but the alliance could not happen: Bhim Army Chief Chandrashekhar Azad pic.twitter.com/Yx3YgMT9wY

Speaking further in this regard, Bhim Army chief Chandrashekhar Azad said, “I have had a lot of meetings with Akhilesh Yadav in the last 6 months. Meanwhile, positive things also happened but in the end it seemed to me that Akhilesh Yadav does not need Dalits. He does not want Dalit leaders in this alliance. He only wants Dalits to fill their votes for him.”

It is worth noting that on Friday, Chandrashekhar Azad, the founder president of Azad Samaj Party (ASP), also met Akhilesh Yadav at the SP office on Friday. There was an intense meeting between the two leaders for about an hour. Chandrashekhar had then also said that his alliance with SP is almost certain. The seat sharing will be discussed soon.

However, Chandrashekhar Azad strongly said that, “All like-minded parties should fight the elections united to defeat the BJP. That’s why we thought of an alliance with the SP.” It is worth mentioning that Chandrashekhar has a good influence on the Dalit class in western Uttar Pradesh. In view of this, there was a lot of discussion about the alliance between SP-ASP, which was not possible according to Chandrashekhar today.

Colombia: A man battling a rare and incurable disease got euthanasia

Big disclosure about the price of OnePlus 9RT, can knock in three color variants

Me and my husband Sameer Wankhede Hindu by birth, never converted – Kranti Redkar