Case registered against Hindustani Bhau; Students should not be misled by anyone: CP Amitesh Kumar 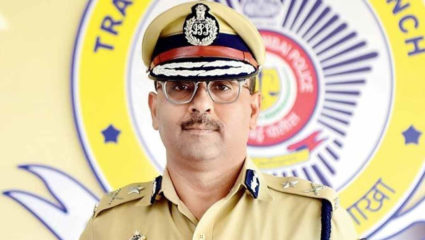 Nagpur. Thousands of students took to the streets demanding cancellation of offline examinations of class 10th and 12th. Along with protesting, the Star Bus was pelted with stones and broke the glass. In this case, the police have registered a case against unknown students including Hindustani Bhau. Along with this, Police Commissioner Amitesh Kumar has appealed to the students not to be misled by anyone. Some people are talking of agitating again for the release of the person who instigated the students.

Students are being asked to get down on the way again, but if they do such agitation by getting on the way again, the consequences will be seen in the future. The police have currently registered a case against unknown students including Hindustani Bhau. Soon he will also be arrested. This movement to cancel the examination was done at his behest. A large number of students gathered at Krida Chowk on Monday afternoon. This movement was carried out bypassing the COVID rules and the bus was also torn.

The CP said that those who spread extremism are being identified through CCTV footage and legal action will be taken. Again an attempt is being made to mislead the students. If the law and order deteriorates again, it will not be good. That is why there is an appeal to the students and their families not to participate in any such movement. Do not enter the road illegally. In doing so, the police will have to register a criminal case and it will lead to wrong results in future.

If any criminal case is registered against anyone, it will be mentioned during character and passport verification. During this time of COVID, stay at your homes and follow the rules. Even if you have the right to protest but that too should be within the ambit of the law. Especially parents are requested not to allow their children to be a part of any such illegal movement.

Gold costs at 4-week peak on inflation, financial progress worries; could commerce sideways to up this week

The Sensex crashed 1,158.08 factors on Thursday in what was a broad-based sell-off within the…

China in the top 3 countries in the list of smartphone addiction, know which number India is

Smartphone addiction is one of the biggest problems facing the digital world right now. In…

File Photo Nashik: The tradition of issuing club tenders to the contractors who get financial…