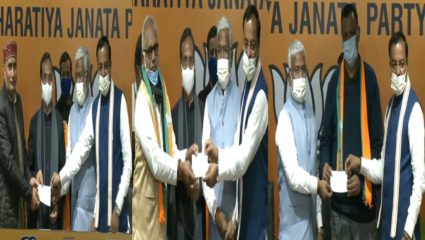 Lucknow : The BJP suffered a second setback after Swami Prasad Maurya on Wednesday and cabinet minister Dara Singh Chauhan resigned. On the other hand, the Bharatiya Janata Party, which became active after getting a setback from Swami Prasad Maurya, a strong minister and leader of backward society, got involved in damage control. On Wednesday, one sitting and one former MLA each from Samajwadi Party and Congress MLA switched to BJP. BJP was successful in breaking one MLA each from SP and Congress. During the ongoing party’s core committee meeting in Delhi, BJP UP President Swatantra Dev Singh made this announcement by holding a separate press conference at the party office. He told that SP MLA Hari Om Yadav and Congress MLA Naresh Saini have joined BJP. Both are OBC MLAs. Similarly, former MLA Dharampal Singh has also joined BJP.

At the same time, former MP and BJP MLA Avtar Singh Bhadana left the party on Wednesday. Bhadana met Rashtriya Lok Dal chief Jayant Choudhary and joined the party. Jayant Chaudhary himself gave information about Bhadana joining the party on Twitter. Avtar Singh Bhadana is the MLA from Meerapur seat of Muzaffarnagar. Bhadana had earlier also been in the Indian National Lok Dal and Congress. It is believed that Bhadana will contest the election of MLA from Jewar seat of Gautam Buddha Nagar on RLD ticket.

BJP sources have claimed that many big SP and Congress leaders are going to join BJP. People who left BJP in SP were opportunists and they believed in dynastic politics. BJP had accused Swami Prasad Maurya of seeking ticket for his son Utkarsh Ashok. When the party refused, he left the party. Maurya’s son Utkarsh Ashok today said on BJP’s allegations that father never asked BJP ticket for me or my sister. My ticket is not an issue at all. Utkarsh said that BJP should not take recourse to false facts. My father has clarified everything why he left BJP.

Meanwhile, SP supremo Akhilesh Yadav has called angry SP MLA Manoj Pandey to meet him. Events have intensified regarding the UP assembly elections 2022. Unchahar (Rae Bareli) MLA Manoj Pandey was called by SP President Akhilesh Yadav to the party office on Wednesday afternoon. There is a rumor about Manoj Pandey that he may leave the SP. However, there has been no official statement from Manoj Pandey regarding this. SP sources say that BJP and RSS people have now become active in spreading rumours. News is being planted in the media. Meanwhile, there is a rumor that 12 SP MLAs are ready to go to BJP. But at the moment there is no such movement. On the other hand, Swami Prasad, who joined the SP, says that something bigger is going to happen on the 14th.

If ITR has not been filed in the last two years, then more TDS-TCS will be required, special system prepared to identify such people