Bizarre wedding photoshoot in Pakistan, the bride and groom took pictures with lions, now in trouble 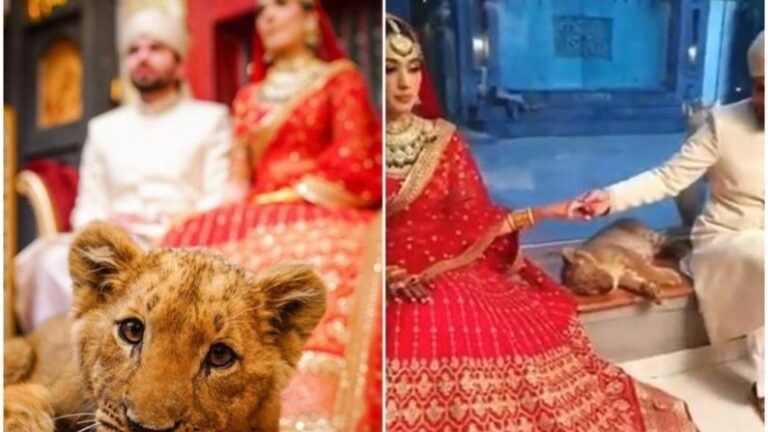 Pakistani Couple Used Lion Cub as Prop For Wedding Photoshoot: The trend of Wedding Photoshoot has increased greatly all over the world. Couples try to make their photoshoot look different, but sometimes they get caught in trouble too. The same has happened with a Pakistani couple. Who recently shared some pictures of their wedding. Their wedding videos and photos are becoming quite viral on social media. However, instead of the accolades that Kapal was expecting, he is facing criticism.

These pictures were first shared by Studio Afzal on his Instagram story. Which is a Lahore based photo studio. It is being claimed that the lion child was given the intoxicant for the photoshoot and then used as a prop in the frame (Lion Cub For Wedding Photoshoot). The hashtag Sher the Rani was written in these Instagram stories. After which people came to believe that this is the real child of the lion, which has been used incorrectly.

What did the studio say in the cleaning?

However, later in the studio, he clarified that this creature does not belong to him nor has he been rendered unconscious. He said that the owner of this creature was present there during the shoot (Pakistani Couple Used Lion Cub). Later, the studio also claimed that the lion’s child has not been harmed in any way. The matter was raised on social media by an animal shelter group called JFK Animal Shelter. Later he also went to the studio for more information. They were told that the studio was regretting its decision.

Gurdeep Singh sworn in as Pakistani MP, the first turbaned Sikh in the Upper House

Claim not to give drugs

The studio told Shelter, ‘The lion baby seen in the picture came with its owner and he also has his license. According to the studio, the substance was not given to Jeeva, he does not even live in the studio but his owner takes him everywhere (Pakistani Couple Used Lion Cub as Prop). ‘ The studio said to the group, ‘Many photographs have been taken of the lion in the wedding shoots, the main root of which is the license, which allows anyone to use them for the wildlife trade.’ The group said that such harassment should be stopped immediately.

Action can be taken on a couple

The video shared by the studio later became quite viral. Then someone shared it and tagged the local authorities in it and requested them to resuscitate the creature (Pakistani Couple Used Lion Cub For Wedding Photoshoot). According to the local news report, the Wildlife Department Punjab has taken cognizance of this viral photoshoot and has thought of taking action against the bride and groom. According to the report, “According to officials, wildlife and birds can be taken together for marriage but they cannot be used for commercial purposes.”

Government vehicles will not be renewed from April 1, 2022, 15 years old, rules will come soon

You know how the Corona vaccine is made! Reaches us through 18 difficult stages

Amidst the havoc of the corona virus, there is only one word on the tongue…

Chicago White Sox get their nearer again as Liam Hendriks comes off the IL earlier than massive sequence vs. Minnesota Twins

Liam Hendriks focused July 1 for his return when he landed on the injured record.…