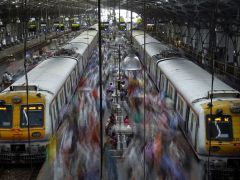 There is a big relief for the passengers regarding the operation of the Mumbai Local Trains, called Lifeline of Mumbai, the financial capital of the country. Indian Railways has decided to operate 204 additional Mumbai local trains from 29 January 2021, giving great relief to those traveling through local trains in Mumbai. With this decision, a total of 95 percent of Mumbai’s local trains will now run on the tracks. However, only people associated with essential services will be able to travel in these local trains.

Railway officials said that 204 special local trains will run in Mumbai suburban area from Friday (January 29, 2021). The joint statement issued by Central Railway and Western Railway said that with the addition of additional trains, the total number of services running on the suburban network will increase to 2,985. Currently, these services are available only to a select class of travelers. The railway has requested other people not to go to the stations.

Railway officials said that with the commencement of 204 additional services, about 95 per cent of the total local train services would be restored which were jointly operated by the Central Railway and Western Railway before the Corona epidemic. Before increasing the number of local train services, Chief Minister Uddhav Thackeray said on Monday that a decision would be taken soon to allow all passengers to travel in the suburban train.

In view of the present-day corona epidemic, only certain classes of passengers are allowed to travel by local train in the Mumbai region, including women and those involved in essential services. Central Railway and Western Railway said in a joint statement that Central Railway has now increased the number of 1,580 suburban services to 1,685 and Western Railway has increased 1,201 services to 1,300. It will be effective from Friday. Prior to issuing a joint statement, Western Railway said it would restore 100 per cent suburban services on its network, but the decision was later withdrawn.

Sudha Chandran complains about being stopped at airport due to artificial leg, CISF apologizes