Big news amid Goa assembly elections, BJP will contest 38 out of 40 seats: Report 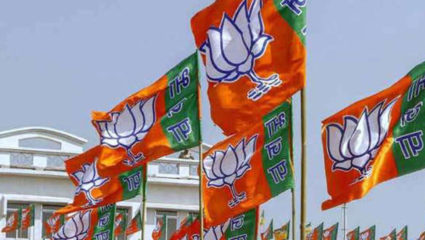 Panaji: The ruling Bharatiya Janata Party (BJP) in Goa has decided to field candidates for 38 of the 40 seats in the state assembly elections to be held next month. A senior party functionary gave this information on Friday. Speaking to PTI, the office-bearer said that the party will not field any candidate on its election symbol in two assembly constituencies – Benalim and Nuvem.

People of Benalim and Nuvem assembly constituencies traditionally vote for non-BJP candidates. These are both Christian majority seats. Benalim is currently represented by Churchill Alemao, who joined the Mamata Banerjee-led Trinamool Congress (TMC) last month after winning the election on a Nationalist Congress Party (NCP) ticket. Nuvem is represented by Wilfred Deesa, who won the last election on a Congress ticket but later joined the BJP.

“A formal announcement about the candidates will be made after January 16, when the party’s parliamentary board will approve the list,” the office-bearer said. BJP is holding its core committee meetings to finalize the names of the candidates. The party’s in-charge for Goa elections and former Maharashtra Chief Minister Devendra Fadnavis is presiding over the meeting, which was attended by BJP state president Sadanand Shet Tanawade, Chief Minister Pramod Sawant among others.

Sawant had told reporters on Thursday that BJP office-bearers would go to Delhi on January 15 to hold a meeting with top leaders, while the party’s parliamentary board would finalize the names of the candidates the next day. The BJP is currently ruling Goa with its 23 MLAs as four MLAs – Michael Lobo, Alina Saldanha, Carlos Almeida and Praveen Jante – resigned from the party and the assembly.

Apart from the BJP and the Congress, several other parties including the TMC and Arvind Kejriwal-led Aam Aadmi Party (AAP) will field their candidates in the Goa Assembly elections to be held on February 14. (agency)

More towns and cities will be retaken, vows Zelenskyy, amid jubilation in Kherson

After all, how will the border related issues between India and Nepal be resolved? KP Sharma Oli answered this question

McDonald’s Enters the Metaverse! Digital Burgers to be found in Virtual Restaurants!