Bharat Bandh: Farmers will bandh on Monday, know who is supporting the farmers’ strike 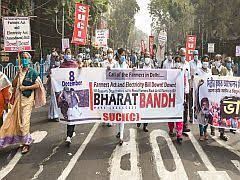 Bharat Bandh: To further strengthen their movement, farmers have announced a Bharat Bandh on Monday, 27 September. This bandh will be led by the United Kisan Morcha. More than 40 farmer unions are involved under this front. The Bharat Bandh by the farmers will start from 6 am and will continue till 4 pm.

Let us inform that farmers have been protesting on the Delhi border for 10 months against the agricultural laws brought by the central government last year.

The United Kisan Morcha has appealed to all the citizens of the country to join the Bharat Bandh and make it successful. Kisan Morcha has asked workers, businessmen, transporters, students, youth, women and all social organizations to unite on September 27.

Bharat Bandh will run from 6 am to 4 pm. All government and private offices will remain closed during this period. The farmers claim that any kind of government or non-government public programs will not be allowed.

Farmers say that all hospitals, medical stores and essential services will continue. There will be an exemption for movement in any personal emergency.

The opposition parties are also supporting this Bharat Bandh called by the United Kisan Morcha. This bandh has got the support of Congress. Apart from this, NCP, CPI, TMC have also supported.

Bahujan Samaj Party chief Mayawati has supported the peaceful Bharat Bandh called by farmers against the three agricultural laws. Mayawati has tweeted that she disagrees and is saddened by the three hasty agricultural laws made by the Centre. The farmers of the country have been agitating for almost 10 months in the whole country and especially in the states around Delhi, demanding their return. Tomorrow, Bharat Bandh has been called, whose peaceful organization has the support of BSP.

PM kisan Samman Nidhi: PM farmer’s money will be double! Installment of Rs 4000 instead of 2000

At the same time, Aam Aadmi Party leader Raghav Chadha has said that the Aam Aadmi Party supports the Bharat Bandh on 27 September called by the United Kisan Morcha. Raghav said that Delhi CM Arvind Kejriwal is always standing with the farmers against the black laws.

Andhra Pradesh government has announced to fully support Bharat Bandh. At the same time, Karnataka CM Basavaraj Bommai has strongly criticized the Bharat Bandh on 27 September against the Agriculture Act.

MPUAT: opportunity to do MTech and PhD programs