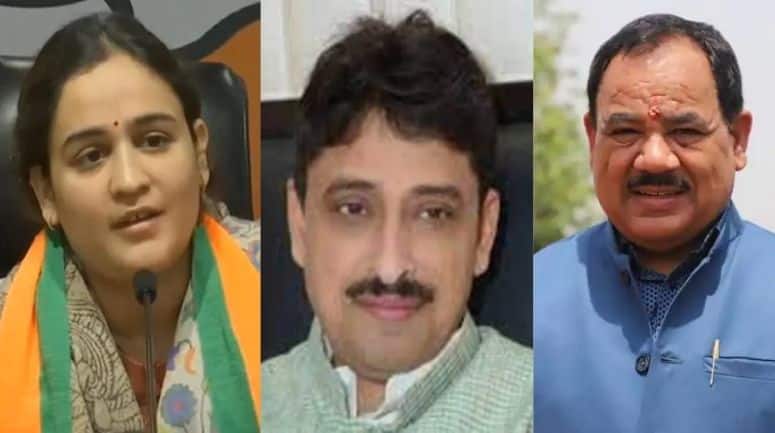 Assembly Election 2022: Jumping from party to party just before the election is an old thing for ticket seekers. It’s just like when someone moves from one company to another for better career prospects but what happens if you resign from a company but the new company doesn’t give you the job you are looking for Were?

Prominent leaders like Harak Singh Rawat in Uttarakhand and Imran Masood and Aparna Yadav in Uttar Pradesh must have understood these things well, because they have moved to other parties, but still no assurance about getting tickets from their new party. have been found.

There is another category of such jumpers who get good promotion and appraisal in their current job but still they change their company for the same job.

Supriya Aaron and Haider Ali Khan from Congress fall in this category. Supriya had got tickets from Bareilly and Haider from Rampur, but still jumped to the Samajwadi Party and NDA ally Apna Dal, thinking that perhaps she had a better chance of winning. With this Haider Ali became the first Muslim candidate of NDA in UP.

Uttar Pradesh Foundation Day: Uttar Pradesh has set the benchmark of development in every sector in the last 5 years – PM Modi

Qadian MLA Fateh Singh Bajwa in Punjab jumped into BJP after Congress decided to give ticket to his brother Pratap Singh Bajwa. Senior party leaders of BJP and SP told News18.com that the challenges have also increased due to last-minute changes. For example, in Saharanpur, the main face of Congress Imran Masood could not get the seat from which he wanted a ticket from the SP-RLD camp.

Masood contests from Nakur seat of Saharanpur, but SP already had a candidate Dharam Singh Saini in that seat, to which Masood lost in the previous election. Saini, who then won on a BJP ticket and was a minister, is now with the SP and was given preference over Masood. Therefore, many times new joining also harms the old employees of the company.

At the same time, it is being said in the BJP camp that the daughter-in-law of the Yadav family, Aparna Yadav, may not get the ticket, but after the election, she can be made the candidate of MLC. The sitting BJP MLA from Lucknow Cantonment seat, from where Yadav had contested last time on an SP ticket, has announced that he will get the ticket there again and Aparna Yadav will not contest.

Now if Aparna doesn’t get a ticket from there, the Samajwadi Party will say, “We told you already.” The SP believes that Aparna was included mainly to embarrass the Yadav family.

Morarji and Krishna Menon were two conflicting stalwarts of Congress’s ideological politics in the sixties.

The case of Harak Singh Rawat of Uttarakhand is even more complicated. He quit the BJP as he reportedly needed three tickets for himself from Kotdwar or Kedarnath, one for his daughter-in-law Anukreethy from Landsdown and another for another ally.

After the BJP cited the ‘one family-one ticket’ rule, an angry Rawat went back to the Congress, where his position is still unclear.

After a week of sacking her by the BJP and not officially welcoming her from the Congress side, Rawat has now tied up with the ticket for his daughter-in-law Anukreethy from Landsdown, which was announced on Monday.

Now it has to be seen that if these leaders still do not get tickets, then what will they do? And for how long will he remain loyal to his new party?

CHICAGO — Brutal. That’s what it’s  like for a beginning pitcher to face the Yankees…