As soon as the rain stopped, the kite-flyers showed their passion; The city sky was occupied by kites till evening 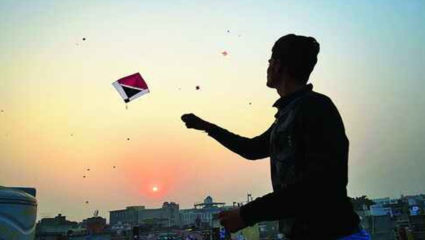 Nagpur. Kite flying is done fiercely in the city on Makar Sankranti. This time also the youth including children had prepared for kite flying. But due to the rain in the morning, the fun of kite flying became gritty. In the afternoon, after the rain stopped, youths, children took kites on the roofs. Oh cut, the sound of cut kept coming. While having fun in the midst of the music system, he robbed the fun of kite flying. Due to fog-like conditions, kites did not stay in the sky for a long time.

Kite flying is fierce on Makar Sankranti. For this, preparations start a few days in advance, but this time the weather has become heavy. Although kite shops were set up, the business did not happen as before. When the people sitting with all the preparations got up in the morning, the sky was cloudy. After sometime it started raining. It rained till around 12 noon. Everyone kept waiting for the rain to stop. As the rain subsided, youth, children, women went to the roofs of their respective houses. Although there was trouble in flying kites due to lack of wind, but after some time the kites started flying in the sky. Along with this, the sounds of O cut, O cut also started coming.

Taking advantage of the weather, a party of Chana-Chivda was also held after the music system on the terraces. At the same time, the kite was cut fiercely from the manja of Bareilly. Nylon manja also appeared in some places. However, this time the plastic kite was rarely seen. Being a paper kite, it was falling due to fog repeatedly. Those who secretly already collected nylon manja also flew plastic kites. Nylon manja was also seen lying on the road. At the same time, kites were also seen hanging on trees, electric wires, but this time it was not fun to rob kites. The strictness of the police was also seen. Many people flew kites from Bareilly’s manja and fulfilled their hobby. Some children were also seen running on the streets to catch the cut kite, but this time it was not as bright as last year.

The police department had closed the traffic on all the flying bridges of the city due to kite flying. On the other hand, the police also had an eye on kite shops. Action was also taken against those selling nylon manja. At some places, action was taken against those selling plastic kites. By evening, kites were seen flying in the sky but their number was not much. To enjoy the festival, the family members appeared on the terraces with the children, but precautions were also taken.

Business Idea: This business broke the record of 80 years in earning, you can also earn big

The mob attacked the police team that went to catch the miscreant, the police fired in self-defense, arrested the vicious

ICICI Bank up 5% after results, should you invest? This is the advice of the brokerage house