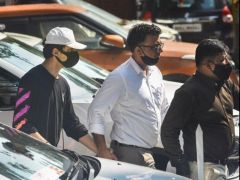 Mumbai Cruise Drug Case Live Updates: Hearing on the bail plea of ​​Aryan Khan, son of Bollywood superstar Shah Rukh Khan, who was arrested by the Narcotics Control Bureau (NCB) in the Cruise Ship Drugs Party case, is underway in Mumbai’s Sessions Court. Earlier on Wednesday (October 13) Aryan’s bail plea was heard, but after hearing the arguments of both, the court postponed the hearing till today i.e. Thursday.

Senior advocates Amit Desai and Satish Manshinde are appearing for Aryan Khan in the court, while NCB is represented by Additional Solicitor General (ASG) Anil Singh, Special Public Prosecutors Advait Sethna and AM Chimalkar. On Thursday, the hearing started a little late on the late arrival of the public prosecutor in the court. At present, the hearing on Aryan Khan’s bail is going on today and the decision can come by around 5 pm.

The ASG said that records and evidence show that he has been regularly consuming the banned substance for the past few years. Currently, Aryan is in Arthur Road Jail in Mumbai. Based on a tip-off that a party was to be held on a ship, the NCB raided Cordelia Cruises on October 3 and claimed to have recovered banned drugs from there.

The hearing on Aryan Khan’s bail plea has started again in the court.

Hearing on Aryan’s bail will start again at 2.45 pm. The hearing was adjourned due to lunch break.

– ASG: Drugs have been found in the possession of Arbaaz Merchant, who was with Aryan Khan, which was for the consumption of both of them. I have shown panchnama and whatsapp chat. I will show the relevant part of the Panchnama. It is recorded in Panchnama that they are going to blast on cruise.

The ASG said that the drugs recovered from the cruise ship were not only for Arbaaz Merchant. Aryan Khan was going to consume it. He said that if the ship had left, the party would have started, all the accused would have taken drugs.

– ASG: Once the connection is established the quantity is not important. It is recorded in the Panchnama that the mobile phone was given voluntarily. Can this not be done in the investigation? What do I check? In the present case there are drug dealers. Achit and Shivraj are drug dealers with whom the accused were in contact.

– ASG: Watch section 35 for a minute. 35 The offender is estimated to be of mental state. The agency’s case that drugs are found to be in its possession should be prima facie held to be correct. The next relevant provision is 54 of the NDPS. Possession of illegal objects is inferred, and at the trial stage the accused has to show that he did not possess illegal objects.

– ASG: So there is always the assumption that when a drug is found in someone’s possession what the agency is saying is correct unless proven by the other wise.

– ASG: Use in relation to narcotics is everything except personal consumption. That’s why I am showing this section. The contention that nothing was found with the applicant cannot be correct. The next submission is that the quantity of hard drug cannot be for personal consumption. Quantity can be seen from chat. Peddler, Qadir and foreign nationals were in contact with Achit Kumar.

– ASG: The Panchnama signed by Aryan establishes the record that he was in a conscious state of the banned substance, as he believes it was with his friend and it was for both of them to consume.

– ASG: The banned substance that was in the possession of Arbaaz Merchant, who accompanied Aryan Khan, was for both of them to consume.

– ASG: I would like to place para 12 of NCB’s reply before the Court. Based on the facts, my submission is that Aryan Khan has not taken any drugs for the first time. Records and evidence before you show that he has been a regular subscriber of banned content for the past few years.

As soon as the hearing started, the ASG said that I am sorry for being late. I was debating a matter in the High Court.

200 Innova vehicles will be converted into ambulances for relief from COVID-19, Toyota dealer in Gujarat offers

SIP, STP, SWP: Easy ways to save your capital from market slumps, what are the better ways to invest and withdraw money