Appointment of Mahometro for preparation of DPR of Metro Rail Project 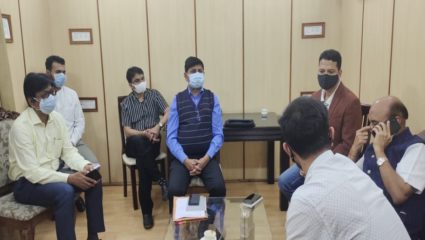 Country’s Minister of State for Finance Dr. Bhagwat Karad on Tuesday held discussions with officials of Aurangabad Smart City, MahaMetro and National Highways Authority of India (NHAI) and directed them to prepare a Comprehensive Mobility Plan (CMP) for Aurangabad Smart City . The city and Shendra also directed DMIC to prepare a joint DPR of Waluj flyover and metro rail.

After the draft is ready, Dr. Karad, Union Minister for Transport and Highways Nitin Gadkari, Union Minister for Housing and Civil Affairs Hardeep Singh Puri, State Urban Development Minister Eknath Shinde and State Industries Minister Subhash Will meet with Desai. Aurangabad MP Imtiaz Jalil had written a letter to the Union Transport Minister to build a flyover on Jalna Road with him, he will also be discussed.

Brief information on the model

Today Maha Metro officials gave a presentation on Metro Rail to the Union Minister of State for Finance, Dr Bhagwat Karad. Maha Metro is a joint venture between the Government of India and the Government of Maharashtra, which operates metro rail projects in Nagpur, Pune and Nashik. The presentation provided brief information on the projects being implemented in different cities, various models of Metro Rail, funding requirements and funding models.

Astik Kumar Pandey, CEO, Aurangabad Smart City said that Aurangabad Smart City will issue work orders to Maha Metro for preparation of consolidated DPR for CMP and Metro Rail and Flyover from Shendra DMIC to Waluj. “It will take 8 to 9 months to prepare the CMP and DPR, which will set clear milestones for the implementation of this ambitious project. Funding options will be proposed to various ministries of the central and state governments, which will decide the way forward.

US government tightens on journalists regarding Corona, it is necessary to submit vaccination form before coming to White House, otherwise investigation will be done...

Women’s Day 2021: How to become women financially free and safe, keep these things in mind

Coronavirus: Dubai eases travel restrictions for its residents coming from other countries including India