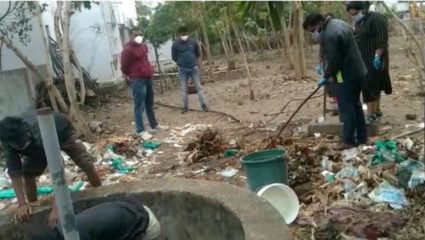 Wardha / Arvi (Team). In the abortion case of Arvi’s Kadam Hospital, on Friday, the police excavated the chamber premises, during which it is reported that the skull of an infant was recovered, during which the excavation work went on for three hours, due to which the stench spread everywhere, along with the forcing teams of Nagpur and Wardha. After reaching the hospital, Dr. Rekha Kadam aborted a 13-year-old girl, this serious episode came to light, in which new secrets are coming out every day.

11 skulls of infants and 54 bones of the body were found in the dung chamber of the hospital, after which SP Prashant Holkar and the team inspected the hospital on Thursday. Sonography machine, register of abortion registration and other documents have been confiscated from the hospital.

The recovered bones have been sent to the lab for chemical examination, so far in the case Dr. Rekha Kadam, the parents of the rapist teenager, two nurses of the hospital have been arrested. All the five accused have been sent to the jail on January 14, Nagpur. 3 members of the forensic team and Wardha forensic team reached Kadam Hospital for a long time, the team has information about getting blood samples and other samples, on the other hand, the police excavated the wells and premises of the hospital premises for about 3 hours. During the excavation, a skull of the baby has been recovered.

As a result, the total number of skulls found so far has gone up to 12. Due to the excavation, foul smell was spread in the premises. At present, no one is being admitted to the hospital, while the condition of the center’s operator and Rekha Kadam’s mother-in-law, Dr. Shailja Kadam, has deteriorated. The police did not take him into custody for questioning. On Friday, Dr. Asha Mirge, a non-official member of the Maharashtra State PCPNDT Committee, also visited Kadam Hospital and took stock of the case. Expressing doubts about the recovered skulls and bones, he did a detailed investigation of the case. demanded.

No change in interest rates on other small savings schemes including PPF and NSC, read all the details

Profit booking mood in the market today, know from Catalyst Wealth at which level to buy in Nifty and Bank Nifty