Air pollution: Delhi will get green fund of Rs 18 crore for the first time under NCAP program 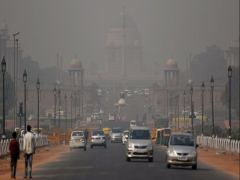 The national capital Delhi will get Rs 18 crore this year under the National Clean Air Program (NCAP) to address critical gaps in air pollution management. This is the first time that Delhi will be given funds under NCAP. The NCAP is a national level strategy aimed at reducing the concentration of PM 2.5 and PM 10 by 20 percent to 30 percent by 2024, with the base year being 2017.

Talking to news agency PTI, an official said that Delhi will get Rs 18.74 crore under NCAP. This is the first time that funding will be received under this program since it started in 2019. The NCAP covers 132 cities that do not meet the prescribed National Ambient Air Quality Standards (NAAQS).

These cities have been identified on the basis of ambient air quality data obtained during the period 2011-2015 under the National Air Monitoring Programme. A Union Environment Ministry official said the national capital did not receive any funds under the NCAP for two years, as it had other resources as green cess to be levied on diesel vehicles above 2000 cc, which is being implemented by Central Pollution Control. Board (CPCB) and pollution tax levied on commercial vehicles entering Delhi were available.

A total of Rs 290 crore is available this year for these 82 cities. Funds are allocated under the Swachh Bharat Urban Program and other central government schemes for large projects such as management of construction and demolition waste.

The Delhi government has drawn up a winter action plan to tackle air pollution in the capital and Chief Minister Arvind Kejriwal is expected to announce it soon. The plan focuses on 10 key issues, which include stubble burning, pollution hotspots, smog tower work and vehicular and dust pollution.

Tesla’s CyberTruck creates a hit in the market, received $ 50 million order in less than a month

What does our Earth look like from the darkness of space? Chinese spacecraft sent a beautiful picture of moon and earth from deep...