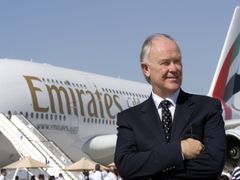 Sir Tim Clark, President of the world’s well-known airline Emirates, says that the privatization of Air India will definitely affect the Emirates, but he says that he accepts this competition. We do. Responding to MoneyControl’s questions, Clarke clarified that Emirates is not currently interested in setting up a domestic airline in India.

Air India is now being privatized. What kind of impact do you see it having on the Indian and global markets? Tim Clarke answered this question through some old memories of his childhood.

Clark said, “I used to travel on Air India in 1958. This was the first Boeing 707 that I flew in January 1960. I was surprised that I, a 10-year-old kid, got on a jet for the first time in my life. And it was operated by that carrier, which was not a BOAC but Air India.”

He said that he had brilliant plans for what India was going to do in those days. Don’t forget that it was only 10 years since independence and her thinking was broad, she was global and the history after that, you know very well.

Clark continued, “When we started Emirates, Air India had 23 aircraft with a population of 1.2 billion. They had an aerial political network, which was huge, but over the years they grew AI to that air. Could not use political network.

“Look at the value India brings to the global economy. The notion that you’ll have an airline of that size operating basically… I’m not calling them reckless…but they could have done much better.”

He added, “If AI is privatized and they are able to develop a business model that is meaningful and brings value to new shareholders and to India, then the scope and scale of that airline is endless and that’s what they need.” also needs to be done.”

“Will this affect us? Of course it will affect us, but you know times change, you adapt and you change, but this one is different. They should have a national carrier the size of Singapore Airlines Was or should have looked at Emirates. Also look at some of the big carriers like Lufthansa, Air France, KLM but to do that you have to be liberal in your thinking. I accept this competition.”

The government has allowed 49 percent FDI in Indian airlines. Would you consider setting up an airline in India? Clarke refused to this.

He said, “Not at the moment. India is probably the largest domestic market in the world along with China. (But as you know) the Indian government controls the fair and they also have a tax on fuel, which I think Margins the whole economics a bit.” There are issues, but shall we not get into it? No, we have too many things to do without getting involved.

Business Idea: If you are fed up with the job, then start this business, earning up to Rs 5-10 lakh every month