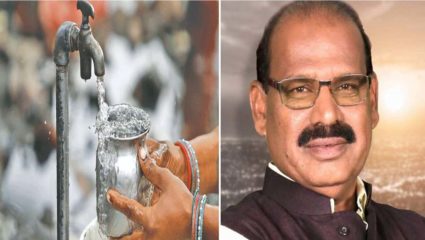 Pimpri: The ruling BJP in Pimpri-Chinchwad Municipal Corporation has failed in the water supply scheme. The citizens of the city are also expressing their anger against this. Water supply schemes like Andhra, Bhama and Askhed are incomplete. Meanwhile, the municipal authorities have now approved an additional expenditure of about Rs 11 crore in the name of maintenance and repair of the water supply project in the Standing Committee meeting held on December 29, 2021. Former MLA Vilas Lande has demanded suspension of this expenditure in a statement given to Deputy Chief Minister and District Guardian Ajit Pawar. Water supply projects are being stalled deliberately by the ruling authorities.

Lande alleged that the ruling party is filling their pockets in the name of maintenance and repair. Also what have you done so far? Raising this question, Lande asked Deputy Chief Minister Ajit Pawar to inquire into the expenditure incurred.

Lande said in a statement to Deputy Chief Minister Ajit Pawar that the project to supply water with adequate pressure to 60 per cent of Pimpri Chinchwad city under the AMRUT scheme has not yet been completed. As a result, there is no water supply in other parts of the city. The citizens of the city are expressing their anger against this lax plan of the ruling party. In this, the officials have started looting the money of the citizens. Lande alleged that the water supply project was being kept inadequate and plans were being made to sanction an additional Rs 11 crore. Under the AMRUT scheme of the central government, a project is underway to supply adequate pressure water to 60 percent of the city in four tender packages.

Under this project, network augmentation of aqueducts, construction of high water tank, installation of new pipes and reduction of water leakage are being done. Billions of rupees have been spent for this. Now again the increased cost has been approved permanently. Several reasons have been given for approving the increased cost. These include changes in geographical conditions, leakages in waterways, frequent complaints of water supply, breaking of canals during excavation during development works, increased rates of works. Therefore, this expenditure will be about Rs 11 crore 53 lakh more than the prescribed amount. Will the thirst of the townspeople be quenched even after spending it? Lande demanded that the authorities clarify this and then sanction the additional funds.

In the increased expenditure, only the economic interest of the ruling party

To implement the AMRUT project of the central government, work was started in four packages. 54.81 crore in the first package, 67.64 crore in the second package, 60.51 crore in the third package and Rs 57.43 crore in the fourth package. However, the officials have failed to implement the project. When the project failed, 11 and a half crores of them are being spent again. Former MLA Vilas Lande also alleged that the approval for additional expenditure is only for the economic interest of the ruling party.

Bank Holiday Alert: Banks will open only 3 days from 27 March to 4 April, check holiday details before going to the branch