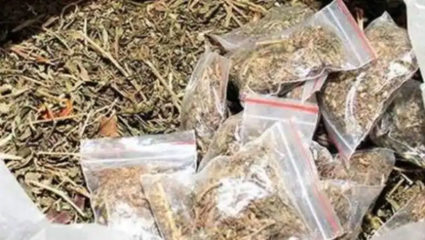 Pimpri: The Anti-Drug Squad of the Crime Branch of Pimpri-Chinchwad Police has conducted a major operation in a dominated village in Khed taluka. Police have seized 98 kg of Ganja brought by a gang smuggled from Orissa. Three people including a woman have been arrested in this case. The value of this seized ganja is said to be Rs 32 lakh.

According to information received from the police, the Anti-Drug Squad of the Crime Branch had received information that a large amount of ganja was being transported in a car. The car came in front of a hotel in Bahul village of Khed taluka. Accordingly, the police took action by laying a trap in the hotel premises. The accused Chetan, Kantilal and Monika were found in the car numbered RJ14/ZC 3310. After taking the three into custody and searching the car, 98 kg 843 grams of ganja worth Rs 31 lakh 73 thousand 75 was found. The police seized the ganja and arrested the three accused. After thorough interrogation, he told that he smuggled ganja from the accused Kumkum from Orissa. Accordingly, a case has also been registered against Kumkum and Ganesh alias Deepak Pawar as Ganesh alias Deepak Pawar had helped the accused in bringing ganja. Assistant Police Inspector Prashant Mahale is probing the case.

old Price Today: Despite the price rise, the right opportunity to buy gold, know how much the price of 10 grams of gold has...

Market pressure on the day of weekly expiry, know in which stocks Himanshu Gupta of Globe Capital has bet