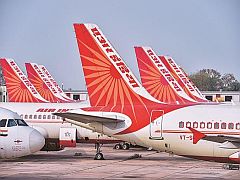 The government has accepted Tata Sons’ Rs 18,000 crore bid to acquire debt-ridden Air India. Air India was started by the Tata group and handed over to the government 68 years ago. SpiceJet chairman Ajay Singh was also involved in the race to acquire Air India. He had given a bid of about Rs 15,100 crore in his personal capacity for this.

After taking over Air India, the challenge of integration of 4 airlines in front of Tata Group

The government had kept a reserve price of Rs 12,906 crore for Air India. Tuhit Kant Pandey, Secretary, Department of Investment and Public Asset Management (DIPAM), said the deal would be completed by December.

He said that the total debt on Air India is Rs 61,560 crore. Of this, Rs 15,300 crore will go to Tata Sons while Rs 46,262 crore will remain with Air India Asset Holdings, a special purpose vehicle designed to hold non-core assets.

This means that the cash share in this deal will be only Rs 2,700 crore.

Ratan Tata, Chairman Emeritus of the Tata Group, said in a statement that it would take a lot of effort to bring Air India back to a strong position. This will be a good opportunity for the Tata Group to increase its presence in the aviation sector.

Under the terms of the deal, the Tata Group will not be able to sell the Air India logo and brand name for five years. Even after this, these assets cannot be sold to any foreign company.

The sale of Air India was a significant part of the central government’s plans for privatization. It was difficult to find a buyer for this as the airline has been making losses for many years and the tough competition was adding to its difficulties.

SSC CGL 2020 Tier-III outcomes out – Here’s how one can examine at ssc.nic.in

Ending the wait of hundreds of candidates, the Staff Selection Commission (SSC) has introduced for…

In these three ways, you can transfer contacts from iPhone to any Android smartphone, learn step-by-step guide

If you’re switching from an Apple iPhone to an Android phone, or keeping both, there…