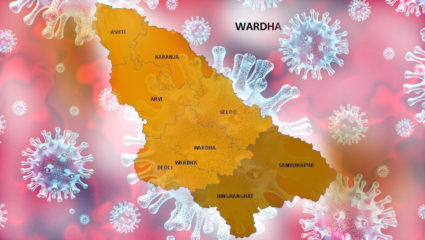 Wardha. From the first day of January in the district, the number of corona infected started increasing at a fast pace, due to the large number of infected, strict restrictions were also imposed. In a month from January 1 to 31, about 6 thousand 712 new infected were found while 3 thousand 606 beat Corona On December 31, there were only 6 active patients in the district, which reached 3173 by January 31, 2022, citizens are feeling relieved due to the reduction in the number of infected in the month of February.

Let us inform that, the first and second wave of corona in the district had created an outcry, taking care of the loss of a large number of people, the administration started preparations to deal with the third wave till December 2021. Were.

Corona’s knock on the new year in the district

But from January 1, suddenly the infection of corona spread in the district, in the state too, the third wave of Omicron and corona started spreading. Restrictions were imposed on the marriage, ceremony, as on 31 December 2021, only 6 active patients were in the district. On January, the speed of the infected increased so much that by 31 January 2022, the total number of active patients reached 3173.

10 patients died in a month

While the death of about 10 people was also recorded in the month of January, the health department had lost its sleep, but the number of infected has reduced as soon as the month of February, the government has also relaxed the restrictions, tourist places, schools, colleges have started again. Citizens including the health department are also feeling relieved due to the reduction in newly infected, but citizens will have to follow the tri-sutra.

‘That was serious pitching’: Chicago White Sox starter Dylan Cease improves to 10-0 versus the Detroit Tigers

Chicago Bulls voice frustration over officiating as the NBA confirms 2 errors in the final seconds of Monday’s loss: ‘It doesn’t do anything’

Wales announce squad for their first World Cup in 64 years

Wales has introduced the squad for its first World Cup in 64 years.The 26-man group…

Coronil can now be exported to 158 countries under the CoPP. Patanjali Ayurved of Baba…