25 thousand women missing in the state, where is the police! : Chitra Wagh 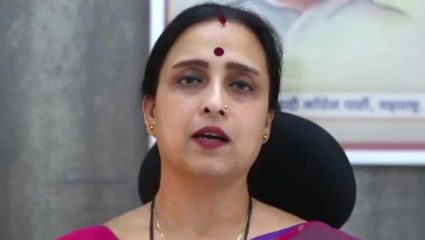 Nashik: In Nashik, teasing with girls starts as soon as the day progresses. Kidnapping is attempted. 25 thousand women and girls have disappeared in the state. What is going on in Maharashtra. This question has been asked by BJP leader Chitra Wagh while talking to reporters in Nashik. During this, he has fiercely attacked the Mahavikas Aghadi government.

Chitra Wagh said that Aaditya Thackeray has requested to build the bridge. Other problems of tribal women and brothers in Shendripada, Savarpada and surrounding campus need to be addressed. 50% of the tribal brothers in the district are not getting the benefits of many schemes. In Nandurbar district, 31 mothers have lost their lives due to unsafe delivery. After all, who is responsible for these child deaths, mother deaths.

Chitra Wagh said that kidnapping incidents are increasing day by day in the state. 25 thousand women and girls have disappeared under the rule of Aghadi government. What is going on in Maharashtra after all? First the police commissioner disappeared, then the home minister disappeared and now the chief minister is missing. As the day progresses in Nashik, the molesting of girls starts. Kidnapping is attempted. Where is the police at last?

what is the matter

An attempt was made to kidnap the girl near the police station in the Marked Road complex in Nashik on Monday. This girl was walking with her uncle. During this, the youths started molesting her. When the girl protested, the youths tried to kidnap the girl. The girl’s uncle tried to save the girl from the kidnappers. After that the girl started making loud noises. After this the employees of the nearby police station rushed towards the spot. These youths were taken into custody. But surprise is being expressed about this incident that happened near the police post. Chitra Wagh’s question is that when people are not safe near the police post, then where can they be safe.

Criminals have been let loose in Nashik. A few days ago, three people including a BJP functionary were murdered in a week. The issue dominated across the state. Incidents of murder and dacoity are happening one after the other in Nashik district. The process of theft and looting also continues. What is the police doing after all?

Get up to Rs 8.5 lakh discount on your favorite cars, know what kind of offers are available in Navratri