2020: Rafael, Ram Mandir, CAA protest, Galvan violence to peasant movement; These are important events of the past year 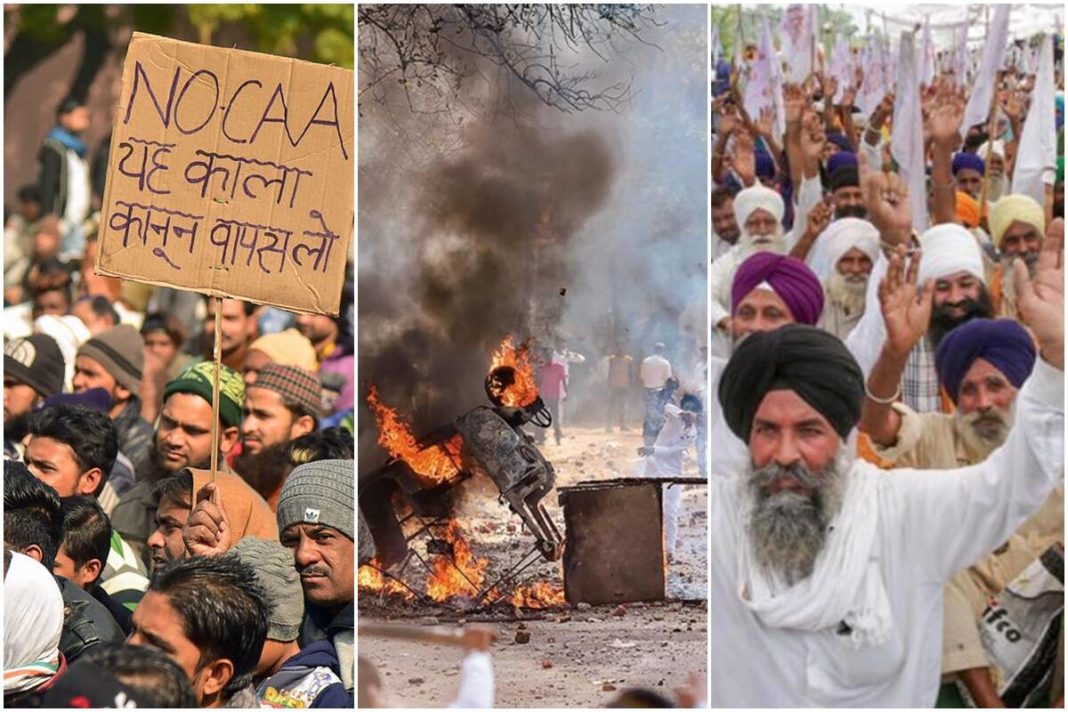 The year 2020 is about to end. It would not be wrong to call this year as ‘Corona year’ because many things have changed throughout the year but the situation of epidemic has not changed. Even at the end of the year, a new type of coronavirus appeared in Britain. Talking about India, here also COVID 19 and its outbreak were prevalent throughout the year, but apart from this, there were some such incidents for which the year 2020 will be remembered. Let’s take a look at some important events of the past year…

Opposition to the Citizenship Amendment Act

The Citizenship Amendment Act (CAA) was enacted by the Narendra Modi government in December 2019. A few days after the passing of this law, a ruckus began on it. The effect of this rift showed for months. By the beginning of the year 2020, protests of the Citizenship Amendment Act started in many areas including Shaheen Bagh in Delhi. Shaheen Bagh then became a model of opposition from CAA and NRC, which was headed by local young and old women at the front. The name that emerged most among these protesters was Bilkis Bano, who was listed by Time magazine in September 2020 in the list of 100 most influential people in the world.

Violence erupted against the Citizenship Amendment Act turned into riots by the end of February. Supporters and opponents of the law clashed in northwest Delhi. More than 50 people lost their lives and hundreds were injured in the Delhi riots. Curfew remained in many areas of North East Delhi for several days.

At the time when Delhi was engulfed in the fire of riots, in the month of February, US President Donald Trump visited India. He was accompanied by wife Melania Trum, daughter Ivanka Trump and several prominent officials of the US government. A grand program was organized to welcome him at the magnificent Motera Stadium in Ahmedabad, which was named as ‘Namaste Trump’.

The first case of corona infection in India came to light in Thrissur district of Kerala on 30 January 2020. After this, in the beginning of February, the second and third cases of the virus came out. Then from March, the epidemic started gaining momentum in India and COVID 19 fell prey to millions of people. Quarantine centers were started at war level to fight the virus across the country, the number of beds in hospitals was increased, the Indians trapped abroad were brought home, the speed of testing was increased and with many preparations, the country’s doctors, including nurses All the healthcare workers, sanitation workers, people involved in essential services, have committed themselves to contribute 100 percent in the war against Corona. Initially there were no testing kits, today around 10 lakhs are being made here everyday. Initially there was a shortage of PPE kits and N95 masks, today it is available in large quantities and it is claimed to be the state of export.

In the 2012 Delhi gangrape and murder case, the morning of 20 March became the morning of justice. In this case all 4 convicts were hanged at 5:30 am on March 20. This is the first time in the history of Tihar Jail, when 4 convicts were hanged simultaneously in the same crime. After 7 years in the 2012 Delhi gang rape and murder case, the victim got justice and a long legal battle continued for hours before the execution.

To prevent the spread of corona virus infection, Prime Minister Narendra Modi announced a nationwide lockdown of 21 days at 8 pm on 24 March. During this time, barring people engaged in essential services, everyone was completely banned from leaving the house. For the first time, simultaneous train and air traffic across the country was completely stopped for the movement of passengers. After this, several lockdowns were announced one by one and each time its duration was extended with new concessions. After 8 June, the central government slowly started unlocking. But the lockdown affected every economic activity of the country in a big way.

This happened for the first time in 166 years due to COVID 19, when the wheels of Indian Railways stopped. The service which was never stopped even during the war, had to be stopped due to COVID. Although the movement of goods from the train continued during this period, only the passenger trains were closed. Before May, the Indian Railways started running again in the form of labor special trains and later special trains.

After a time in the lockdown, migrant laborers trapped here and there started on their way to their villages. The migrant laborers took this step due to lack of adequate arrangements for living in the big city. Due to no other means of returning home, he set out on foot and even a long distance of thousands of kilometers could not change his decision. During this time some died on the way. This went on till April. On May 1, the day of Labor Day, Indian Railways started arranging labor-specific trains to release such migrant laborers to their home states. From May 12, some more special trains were run.

Many people lost their jobs during the lockdown, many industries were shut down. In such a situation, many people who had taken loans from banks, a concern arose how to fill EMI in time. To relieve this concern, the RBI made available the option of Lone Moe Rhetorium in March. Its borrowers could postpone their EMI for three months but during this time they were not exempt from interest. The first loan moratorium was till the end of March but later it was extended till 31 August.

In March this year, former Union Minister Jyotiraditya Scindia rebelled against the Congress and joined the BJP. His rebellion put the Kamal Nath government in Madhya Pradesh in trouble and finally collapsed. After this, the BJP government came to power in the state and Shivraj Singh Chauhan again became the Chief Minister. At the same time, there was a conflict between the then Deputy Chief Minister Sachin Pilot and Chief Minister Ashok Gehlot in Rajasthan in July. Pilot left the post of Deputy Chief Minister and such situations arose that the Gehlot government was in crisis. Later this crisis has been postponed after the intervention of the central leadership and the Gehlot government still remains in power.

Many celebrities of cinema world passed away

The year 2020 became the year of death for the celebrities of the cinema world. Apart from Bollywood, many famous personalities of regional cinema also died in this year. Some were killed by Coronavirus and some embraced death on their own. Prominent personalities that India lost in 2020 include actors Irrfan Khan, Rishi Kapoor, Sushant Singh Rajput, musician and singer SP Balasubramanian, choreographer Saroj Khan, famous Bengali actor Soumitra Chatterjee, comedian Jagdeep, music director Wajid Khan, lyricist and poet Rahat Indauri etc.

In May, the country battling Corona was shaken by the storm of Amfan in the Bay of Bengal. During this time, the eastern part of the country, West Bengal suffered a lot of damage. There was a loss of $ 13.9 billion in West Bengal due to the storm Amfan. About 30 thousand houses have collapsed, while the standing crop in 88 thousand hectares has been destroyed. Many people also lost their lives by this cyclone. At the same time, the northern areas of the country faced the terror of locusts. These locust teams destroyed hundreds of acres of crops in several states including Rajasthan, Madhya Pradesh and Maharashtra.

Bollywood actor Sushant Singh Rajput was found dead in his flat in June. After his death, the drug connection case in Bollywood caught fire and Shinkaja was tortured on several celebrities one after the other. Sushant’s girlfriend Riya Chakraborty was also detained by the NCB for a few days in the drugs case. Many big personalities of Bollywood were also questioned. Comedian Bharti Singh and her husband Harsh Limbachiya were also involved in the possession of drugs by the NCB.

Many stalwarts of politics said goodbye

In July 2020, the first batch of Rafale fighter jets reached India and landed at Ambala airbase. After this, the second shipment of Rafale fighter jet reached Jamnagar airbase in Gujarat in November. Now the total number of aircraft in the fleet has increased to eight. This was nearly four years after India’s agreement with France, which included the purchase of 36 aircraft at a price of Rs 59,000 crore.

The result of the economic activity affected by the lockdown was that the year 2020 proved to be a very bad year for the Indian economy. In the first quarter (April-June) of the current financial year, the country’s GDP recorded a decline of 23.9 percent and the economy came to a low of 40 years. Recently the GDP figures for the second quarter (July-September) were released, in which the state of the economy has improved. The July-September quarter saw a 7.5 percent drop in GDP.

There has been a long military standoff between India and China in eastern Ladakh. In order to create controversy, China increased military deployment in Galvan Valley, in response, India also strengthened the gathering of troops. On the intervening night of 15-16 June, there were violent clashes between the soldiers of India and China in the Galvan Valley, in which 20 Indian soldiers lost their lives. China also suffered significant loss of life and property. Despite several rounds of talks to reduce tensions between the two countries, no concrete solution has been reached.

Ban on many Chinese apps

After the violent clash between India and China in the Galvan Valley, the Indian government banned 59 mobile apps in the country in June. Many Chinese apps including Tik Tok were included in this list. It has been said that these apps are harmful to India’s sovereignty and integrity, defense of India, security of the state and public order. After this, in September, the government banned 118 more mobile applications. PUBG MOBILE Nordic Map: Livik, PUBG MOBILE LITE etc. were included in this list.

The central government brought 3 new agricultural bills in September, which became law after the approval of Parliament and the President’s seal. But farmers are not getting these laws. They say that these laws are anti-farmer and are going to benefit corporates. Farmers are afraid of ending the minimum support price (MSP) of the crop with these laws. Farmers of many states including Punjab, Haryana are continuously opposing these agricultural laws. Since 26 November, many farmers have been standing on the Delhi-Haryana border and are continuously protesting. Many of his visits with the central government have remained fruitless till now. The farmers are demanding the withdrawal of these three laws.

15+ Daily Habits That Can Damage Your Kidney

Home Loan: Interest in Kotak Mahindra Bank reduced to 6.75%, loan rate in these banks is also 7% or less