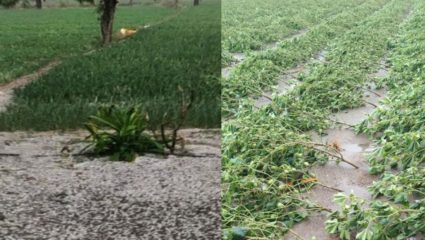 Amravati. Along with unseasonal rain for two consecutive days on Saturday and Sunday, hailstorm occurred at some places in the district. Due to which there is a primary estimate of crop failure in a total area of ​​19,478.55 hectares in the district. The maximum damage has been recorded in Morshi tehsil. There has been massive damage to cotton, tur, orange, wheat, gram, onion, sugarcane and other crops. 64 houses have been partially damaged by the hailstorm. Reports of 5760 people being disrupted in Morshi have been received from the district administration. Due to which there is a demand by the farmers to declare the help of the farmers suffering from this loss by doing Panchnama immediately.

The district received unseasonal rains in the early hours of January 8 and January 9. There was hailstorm in some parts during this time. The unseasonal rain and hailstorm caused heavy damage to the Rabi crop in the district. The district has recorded an average of 13.6 mm of rain. Due to the hailstorm between the clouds and the storm, 64 houses have been damaged in the district. Most of the houses are in Morshi Tehsil. Due to which the district administration has given information about the disruption of 5760 people.

Farmers worried due to loss

Heavy rains in Kharif wreaked havoc on the farmers in the district. Now the farmers dependent on Rabi are once again facing natural calamity. On one hand, farmers are not getting the prices of agricultural produce. On the other hand, the farmer is troubled by the sky crisis. The demand for immediate financial help is being made from every tehsil and rural town.

Due to the strike, the work in the university came to a standstill, there was a shadow of silence in the departments before the...

A star 100 times bigger than the Sun, a wonderful picture of the explosion in the star taken for the first time, scientists are...