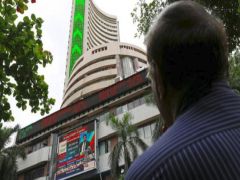 Two days later, the general budget is going to be presented on February 1. There is a strong sell-off in the stock market before the budget. The Economic Survey 2021 also failed to woo investors of the stock market. Due to this, on Friday, for the sixth consecutive day, the markets closed in a huge decline. Within a week, investors have lost Rs 11,57,928.54 crore. The BSE Benchmark Tanked closed 588.59 points, or 1.26 percent, down at 46,285.77 points in trading in the upheaval trading.

Dr Reddys, Maruti suzuki, Bharti Airtel, Bajaj Auto, Infosys and TCS declined by 5.69 percent. On the other hand, IndusInd Bank, Sun Pharma, ICICI Bank and HDFC Bank closed up. It was up by 5.44 percent. During the day, Minister Nirmala Sitharaman presented the Economic Review 2020-21 in the Lok Sabha. She is scheduled to present the Union Budget for 2021-22 on Monday. The Economic Survey forecasts an 11 percent increase in gross domestic product (GDP) during the next financial year.

The Economic Review said that the country’s economy is going to return sharply after the decline due to the epidemic. The review also said that according to data from April to November 2020, the government may miss the fiscal target in the current financial year. Analysts believe that domestic markets have been witnessing a steady decline mainly due to profit-booking ahead of the Union Budget and important global developments. 16 out of 19 groups of BSE were in decline. 2.97 percent in telecommunications, 2.95 percent in vehicles, 2.63 percent in technology and 2.48 percent in information technology.

This dhansu phone with 4 cameras launched at a price of only 9,499 rupees, you can shop from 3 o’clock today