Suggestion To Increase The Amount To 12,000 for Kisan Samman Nidhi 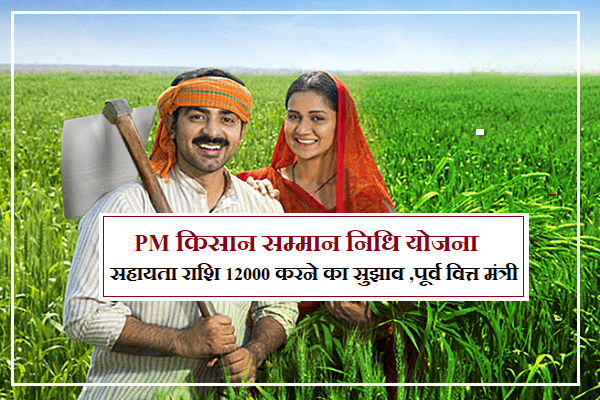 The Central Government has launched the Pradhan Mantri Kisan Samman Nidhi Yojana (PM Kisan Samman Nidhi Yojana) with an aim to provide financial assistance to the farmers. The scheme was announced by Piyush Goyal on 1 February 2019! Under this scheme, there is a provision to provide financial assistance of 6000 rupees per year to the poor and marginal farmers! This amount will be directly transferred by the central government to the bank account of the farmers! This amount of 6 thousand rupees will be transferred to the farmers in three installments (two thousand per installment) by the government!

But now the Central Government has been suggested to double this assistance amount from Rs 6000 to 12000! The suggestion to double this amount has been given by the opposition leader and former Finance Minister P. Chithambaram! Former finance minister says that the lock-down has worsened the economic condition of the farmers. And now if the farmers are not provided financial help, then the farmers will be in a state of self-murder! Therefore, the central government should help farmers financially by doubling the amount of Pradhan Mantri Kisan Samman Nidhi Scheme.

If the central government accepts the suggestion, then the farmers will get Rs 12 thousand.

If the central government accepts this suggestion of former Finance Minister P Chidambaram! So, in the coming time, the farmers will be covered under the Kisan Samman Nidhi Scheme. A total amount of 12 thousand rupees will be received every year! This will greatly benefit the farmers! But doubling the support amount will also double the amount on the central government! The financial condition of the central government has also deteriorated due to the lockdown! Now in the coming time, it will be known whether the Central Government is increasing the amount of Kisan Samman Nidhi Yojana or not!

Financial assistance of 19000 crores to farmers during the lockdown

In the ongoing nationwide lock-down due to Corona epidemic in the country, the central government has given financial assistance of about 19100 crores to the farmers! This assistance has been given to farmers in the form of Kisan Samman Nidhi Scheme. During the lockdown, the Central Government transferred the installment of the Kisan Samman Nidhi Yojana to the bank account of the farmers. This amount of 19100 crores has been transferred to about 9.58 crore farmers’ bank account. The central government is transferring this amount from 24 March 2020 till now!

Which farmers get the benefit of this scheme

Also know – PM Kisan Samman Nidhi Scheme 2020: If the installment of Rs 2000 under PM Kisan Yojana is not received, then check online like this

PM Modi said on the last day of G7 summit – India is a ‘natural’ ally of G7, know the special things of Prime...

Government in preparation for changes in pension rules, know how you will benefit more