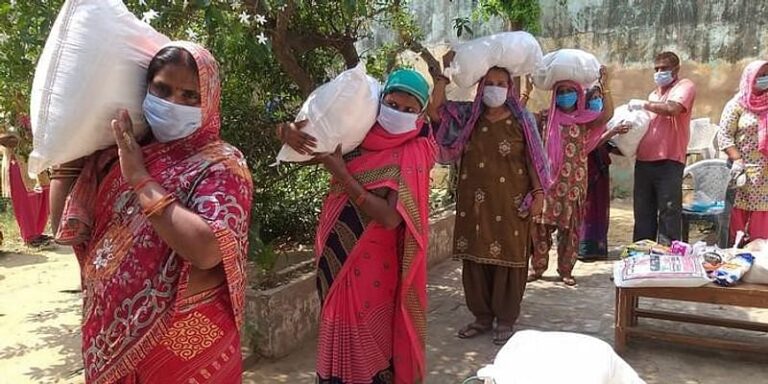 As part of the Rs 1.70 lakh crore Pradhan Mantri Garib Kalyan Package (PMGKP), the government announced free grain and cash payments to women and poor senior citizens and farmers. Rapid implementation of this package is constantly being monitored by the Central and State Governments. Under the Pradhan Mantri Garib Kalyan Package, about 42 crore poor people have received financial assistance of Rs 68,820 crore.

An amount of Rs 17,891 crore was sanctioned for payment of first installment of PM-Kisan to 8.94 crore beneficiaries.

Under self-reliant India, the government has announced to provide free grain and gram to the migrants for two months. According to the information available by the states, the estimated number of migrants is around 28 million. 2.67 lakh metric tonnes of food grains have been distributed to 5.32 crore migrants during the period up to August. This shows that about 2.66 crore beneficiaries per month have benefited. These numbers constitute about 95 percent of the estimated number of migrants. Similarly, 16,417 MT of gram was distributed to 1.64 crore migrants under self-reliant India. Thus, an average of 82 lakh families have been benefited every month.

MNREGA: Increased wage rates have been notified from 01-04-2020. 195.21 crore working days were created in the current financial year. In addition, Rs 59,618 crore was released to pay the pending amounts of salary and material.

In this policy of LIC, you can get 17 lakh by depositing just Rs 233, know the specialty of the scheme

LIC’s Jeevan Labh policy guarantees safety and better returns. In this scheme, the benefit of…

Chandrapur: One died of corona after 50 days, today the number of corona infected suddenly increased

File Pic Chandrapur, On the occasion of New Year, suddenly the number of corona infected…

Fire alarm, tap water or baby crying, now your iPhone will identify any voice, use this way

Searching for a job? Take small steps every day

Q. I have to search for a brand new job. I’m excited however nervous as…