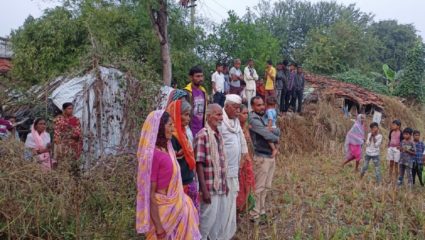 Chimur, The houses of the tribal Mana tribe in Pandharwani have been living on the land adjacent to the village for many years. Farmer Khatik’s farm is adjacent to the canal on the land of the village’s population. These families have been approved by the administration’s house plan. Accordingly, the family has dug the foundation. But the farmers are not allowing the beneficiary family to build their families. At the same time, creating obstacles in other work. But these families have no relatives. Due to the negligence of the administration and the arbitrariness of the farmers, 17 families of the Mana tribe are getting destroyed.

At a distance of 15 km from the taluka headquarter, Pandharwani village under Khutala Gat Gram Panchayat has a population of about 900. In the village adjacent to the canal of farmer Khatik, there are thirteen houses of tribal tribe Mana society, two houses of SC society and two houses of NT society. The Gram Panchayat records this family. This family is residing here for 30 to 40 years. The agricultural land of the Khatik families in Neri is near Pandharwani village, they come daily to work in the fields and for whatever reason, quarrel with the tribal families.

The victim’s mother has given such information after a boy entered the house and thrashed his son when the village family stopped him from coming to the farm. Khatik is trying to suppress the families living near the canal. Due to this this family is in panic. Many schemes of the government came in the name of those 17 families of the village, but the farmer did not let them come true. The households were approved for the first five families and they were ready. Now two families were approved by the household and they dug the foundation. But the farmers are creating hurdles. Despite complaining about this, the administration did not pay any attention, such an allegation has been made by the victim’s family.

This family lives in the village

Pandharwani villagers allege that despite information being given to the administration, attention is not being paid to it. How long can you tolerate such injustice? Because till date no one has taken initiative to get them justice. That is why now the tribal society has made preparations for the movement.

The survey of agriculture near Pandharwani village has been requested to the Land Survey Office. This matter is in court. The allegations made by the Adivasi Mana tribe are baseless.

You must have been using WhatsApp and nowadays everyone also has a smartphone. If you…

A century or extra in the past, Baltimore artists created, drew and produced stunning photos…

FOXBORO — The chants rang out from a small, grassy hill, steps from the place…