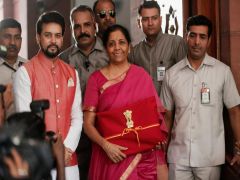 Union Budget 2021 is going to be presented on February 1. Union Finance Minister Nirmala Sitharaman has already said that this time the budget will be like never seen before. In simple language, it is called budget to provide complete information about how much the government will earn in a financial year and how much it will cost. During the announcement of the budget, the government announces all the schemes, because the government’s money is also spent in running the schemes. At the same time, all kinds of reliefs including tax are also announced in the budget, because it is also similar to the government’s expenditure.

The first name in the Finance Minister’s team is Ajay Bhushan Pandey … Currently Revenue Secretary Ajay Bhushan Pandey is a 1984 batch IAS officer of Maharashtra cadre. He has been the CEO of UIDAI. After convincing himself in UIDAI, Pandey will be eyeing the same impression on the revenue front. He is seen as one of the most powerful bureaucrats in the central government. Pandey is an electrical engineering graduate from IIT Kanpur and a PhD in computer science from the University of Minnesota. Pandey, who retires at the end of February, has the responsibility to raise revenues to spend on health and defence and to maintain a balance while keeping the income tax rate low in the epidemic.

Tarun Bajaj is currently the Secretary in the Department of Economic Affairs, Ministry of Finance. Prior to joining the Finance Ministry, he also worked in the Prime Minister’s Office (PMO). Bajaj is a 1988 Haryana batch IAS officer. He has worked on several relief packages. Bajaj has been instrumental in shaping the three Aatmanirbhar Bharat package. In this budget, it has to be seen how his suggestions help the government to revive the economy.

In the budget of this time amid the Corona epidemic, everyone will have their eyes on the department of Tuhin Kanta Pandey. Tuheen Kant is the Secretary of the Department of Investment and Public Asset Management. Pandey is a 1987 batch IAS officer of Punjab cadre. He was appointed as Secretary of DIPAM (Department of Investment and Public Asset Management) in October 2019. This time the budget will also keep an eye on their actions, as the center is currently focused on raising revenue from disinvestment.

Debashish Panda is currently the Principal Secretary in the Department of Financial Services, Ministry of Finance. All announcements related to the financial sector come under his responsibility in the budget. He is a 1987 Uttar Pradesh batch IAS officer. Panda is also responsible for working closely with the RBI to ensure the stability of the financial system.

Column: Minnie Miñoso finally got his Hall of Fame induction. But the recognition for one of baseball’s trailblazers is far too late.

To some extent, most individuals need to depart a legacy. Making an influence on these…

‘Baba Vaenga’ had predicted about Russia, knowing will fly away

(Image-Instagram-aprimoramentohumano-cookiedougontheroad) new DelhiThere are many people in the world who make predictions, many of these…