First small and midcap stocks of the budget showed shine, important support for Nifty at 13400 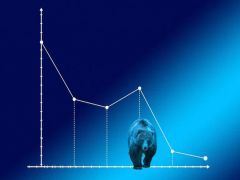 Last week saw a red mark in the Indian markets and the key index slipped below its support level but the Border market (small and midcaps shares) has outperformed the Sensex and Nifty. On the last trading day of the week i.e. yesterday the S&P BSE Cessanx closed below 47000 while the Nifty50 also slipped below 13700.

Weak global cues and selling by foreign institutional investors have put pressure on the market. FIIs sold over Rs 12000 crore in the cash segment in the Indian Equity market.

Vinod Nair of Geojit Financial Services told Moneycontrol that the market remained in the negative zone during the last week. This was due to weak global cues and selling of FIIs. The first market of the Union Budget saw the sale of both domestic and foreign funds.

He further said that due to the re-introduction of the lockdown, the global setbacks were seen to be weakening due to the hopes of economic recovery and betting activities in the US market. The economy survey presented yesterday indicated a V-shape recovery in India and GDP growth at 11 per cent in FY 2022.

From the market perspective, the budget presented on 1 February 2021 and the December quarter results are very important. Let us know that most of the results so far in this quarter have been consistent and stable as expected. Now from February 1 to February 5, 2021, more than 400 companies will present their results. Technically speaking, Nifty50 has given a breakout from the critical support levels between 14000 and 13800 levels. The Nifty has slipped below the critical support level of 13750 (50-Days SMA). Its 50-days EMA is also at 13700 only.

Market giants recommend that you take a cautious approach while investing and keep an eye on the important support of Nifty 13400. Any closing above 14000 can add some excitement to the bulls.

Talking to Moneycontrol, Dharmesh Shah of ICICI direct said that the key indices saw profit-booking in the week ended 29 January 2021 and the Nifty had closed around 13635. The Nifty saw a decline of about 5 per cent in 1 week, but in the meantime small and midcap stocks outperformed Lorgecap. Prior to the budget, profit booking is a healthy sign for the market. Dharmesh Shah believes that any closing above 14000 of the Nifty will open the door of 14500 for this in the coming weeks.

He further said that around 13400-13500 level, we will again see a purchase, keeping in mind that investors are advised to invest in small installments of good quality large-cap stocks. Dharmesh Shah believes that stocks related to IT, banking, consumption and infrastructure sector will play an important role in the upcoming rally. Apart from this, it is also advisable to invest in good quality smallcap shares like Bajaj Electrical, PNC Infra, Amber Enterprise, Birla soft.

Disclaimer – The advice given on BusinessKhabar.com is the experts’ own personal opinion. It has no relation to the website or management. BusinessKhabar is advised to the users that before taking any investment decision, advice from the Certified Expert Take it.

Reliance Jio and Infinix are bringing together this very cheap smartphone in India, all the features will be available in just this price