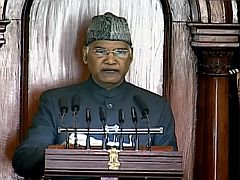 Inaugurating the budget session, President Ram Nath Kovind termed the nuisance on January 26 as unfortunate. He said that the constitution which gives us the right to freedom of expression, the same constitution teaches us that law and rule should be followed equally seriously. After this, he also reiterated the government’s decisions made in the last few years for farmers.

The President said, “The government had also decided to give MSP one and a half times the cost by implementing the Swaminathan Commission’s recommendations. Today the government is not only purchasing record quantity on MSP but also increasing the number of procurement centers. ” He further said, the government has attempted a positive change in every system from seed to market in the last 6 years, so that Indian agriculture becomes modern and agriculture is also expanded.

The President said, “I am satisfied that the precise decisions taken by my government in time have saved the lives of millions of countrymen. Today the number of new patients of Corona in the country is also decreasing rapidly and those who have been cured of infection The number is also very high. ”

He further said that through the Pradhan Mantri Garib Kalyan Yojana, 8 crore additional food grains were given free of cost to 80 crore people for 8 months. Nearly 31 thousand crores rupees were also transferred directly to the Jan Dhan accounts of poor women. The President said, “It is a matter of pride for us that today India is running the world’s largest vaccination campaign. Both vaccines of this program are manufactured in India. In times of crisis, India has fulfilled its obligation towards humanity. Countries have made millions of doses of the Corona vaccine available. ”

China preparing ‘super soldiers’ by examining the DNA of pregnant women, a sign of ‘big danger’ from India to America