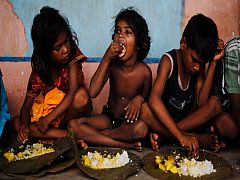 When the last budget was presented, an amount of Rs 35,600 crore was allocated to improve the condition of the country on the health and nutrition front. When compared to the budget of 2019-20, the total amount allocated for nutrition programs was increased by 22 percent.

Apparently, this increase was appreciated in the news. In his budget speech, the Finance Minister, while looking at the programs of nutrition on a big scale on the level of policy, said in a holistic voice: “Nutrition is very important in terms of health. To improve the nutritional status of children (0-6 years), adolescent girls, pregnant women and maternity women, the Prime Minister launched the nutrition campaign in the year 2017-18. More than six lakh Anganwadi workers have been equipped with smartphones to record the nutritional status of more than one million families. This is an unprecedented development in itself. ”

These words of the Finance Minister are going to prove to be a challenge for him while presenting this year’s budget. What is the picture of the country on the nutrition front that emerges from the figures of more than 10 crore families with the help of six lakh Anganwadi workers equipped with smartphones? Why go too far for an answer, it is better to remember the India-specific facts of the Global Hunger Index that came here a few months ago (October 2020).

India ranked 94th in the list of 107 countries in the Global Hunger Index. The report placed India in the category of starvation countries where the condition is “severe”. India got a total score of 27.2 on the Hunger Index, meaning India also lagged behind its neighbors Nepal (73rd), Pakistan (88) and Bangladesh (75) on the starvation front. Recall the figures of the 2019 Global Hunger Report so that some guesses can be made about the progress made within a year. In the 2019 report, India was ranked 102 among 117 countries. Nevertheless, on the nutrition front, neighboring countries Nepal (73), Sri Lanka (66), Bangladesh (88), Myanmar (69) and Pakistan (94) were ahead of us.

Based on these four criteria, the Global Hunger Index marks the countries on a scale of 0–100. Considering these four criteria, if a country scores between 20 – 34.9 when counted, then in the index it is considered to be a country with severe starvation condition. If India remembers the performance of previous years on the Global Hunger Index, then it will be seen that India’s GHI score has decreased in fifteen years. India’s GHI score was 38.9 in the year 2005, which peaked at 32 in 2010 and fell from 30.3 in 2010 to 2019. GHI score of the year 2020 (27.2), you have already read above. Obviously, between 2010 and 2020, India has often been in the category of countries facing severe conditions on the starvation front.

The serious picture emerging on the nutrition front from the data of the Global Hunger Index is also confirmed by the new data from the National Family Health Survey (NFHS-5). In the information given by the Information Bureau (PIB), about these figures which came a month ago, it is also recorded that the prevalence of anemia in women and children still remains a matter of serious concern. In 13 states, more than 50 percent of women and children are prone to anaemia. The number of anemic women in pregnant women has increased in the 50% states / UTs of the country as compared to the previous count (NFHS-4).

NFHS-5 facts indicate that the ratio of infant and child mortality (children under five years) and children with stunted growth (stutting and vesting) is indicative of malnutrition such as declining growth in many states. Then giving notice of the halt. This means that children born in some states of India between the years 2014 to 2019 are far more malnourished than children of their previous generation.

Now, if you want, against this picture of hunger and malnutrition, you can see what is the truth and how much is needed to keep the words of the last budget of Finance Minister Nirmala Sitharaman. In the last budget, in order to announce the increase in the allocation of funds for nutrition, the Finance Minister said – “With the progressive progress of India, higher education and career opportunities are opening up for women. In such a situation, it is very important that along with reducing maternal mortality, nutrition levels should be improved. The whole issue of girls entering maternity stage should be seen in this light. ”

What is the reason behind lagging on the nutrition front?

Why is India so far away from gaining a respectable place among the international fraternity on the nutrition front despite huge plans such as the Mid Day Meal Scheme and Integrated Child Development Program? One of the reasons that the scholars of the subject give is that the yield of small and marginal farmers in India is either stagnant or has decreased due to many reasons. The main reasons for this are the decrease in the fertility of the land, the continuous shortening of holdings and the sharp decrease in the market value of agricultural produce.

Remember that more than 5 crore families of the country fall under the category of small and marginal farmers. So, on the one hand it seems that FCI godowns are full of grain, but on the other hand there are more than 5 crore farmer families who do not get their year-round sustenance.

Secondly, there is also a large section in Indian society whose income (if compared to other sections of the society) is constantly decreasing. This section is unable to buy the food it needs in the event of rising inflation (this is the most popular COVID. In the period, remember the condition of immigrant laborers).

The third point in this regard is that a large part of the working population of the country (like agricultural laborers) is engaged in such works where the cost of work is much less than those employed in other areas of employment.

And the fourth thing is the inability of government nutrition programs and PDS (Public Distribution System) to be followed in many states. In short, more than 50 percent of India’s families go through such an economic situation in many months of the year when they do not have enough money to get the food they need.

This condition has become worse during the captivity of COVID-Kaal. The findings of a survey named Hunger Watch were published recently (December 2020). The Right to Food Companion and the Center for Equity Studies conducted a survey among about four thousand people from 11 states of the country. Its facts suggest that the incomes of the disadvantaged groups such as SC, ST, OBC, special tribal groups, slum dwellers, daily wage laborers, farmers and single women have decreased during September-October (2020) as compared to pre-lockdown Has come. Nearly one-quarter of the total respondents of the survey reduced their income during September-October compared to before the lockdown.

The impact of this reduction in income on the nutritional status of these families will be gauged by these facts – a total of two-thirds of the people surveyed reported that their food intake has now reduced much compared to the lockdown period. . About 28 percent said that both the quality and quantity of nutrition in their family has reduced greatly. About 45 percent said they had to borrow money to buy food in the following months, compared to before the lockdown.

The app, which was banned by Apple from its App Store, is now getting its return, know the whole matter

Covid-19 News Updates: The wave of corona is slowing down! less than 500 died due to corona in last 24 hours