Dreaded gangster Ajay Gurjar, who won 8 gold medals in Taekwondo, was arrested, used to do recovery like this 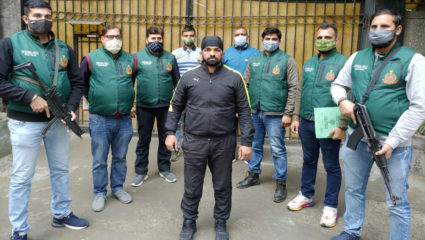 New Delhi: A Taekwondo champion-turned-gangster man has been arrested for allegedly hatching a conspiracy to harm a police officer in southeast Delhi’s Badarpur area. Officials gave this information on Saturday. He said that the accused Ajay Gurjar alias Bhai Ji (41) of Haryana’s Palwal district wanted to avenge the death of a person named Ankit Gurjar in jail, so he targeted the Deputy Superintendent of Tihar Jail.

Police said the recording of a phone call between the two men in August 2021 was widely circulated on social media. One of them was identified by the police as Satendra alias Satte. In the audio, Satte is heard asking another person to arrange an AK-47 rifle to kill a member of the rival gang. During this, he was also heard talking about harming the Deputy Superintendent of Tihar Jail.

Ankit was found dead on August 4, 2021 in Tihar’s Central Jail No. Several wounds were found on his body. His family members had alleged that he was murdered in connivance with the jail personnel. Police said that after Satte’s arrest on August 17, they identified the second person who spoke in the phone call, who was Ajay Gurjar. Deputy Commissioner of Police (Special Cell) Jasmeet Singh said that during the investigation, the police came to know that Ajay was about to come to a bus stand in Badarpur on Thursday evening, after which he was caught after laying a trap.

Police said Ajay has been involved in over 24 criminal cases including murder, attempt to murder, extortion and assault in Delhi, Haryana, Uttar Pradesh, Rajasthan and Mumbai. Ajay’s cousin J.P., who belongs to the underworld. Gurjar introduced him to the dreaded gangster Hafiz Baloch of Mumbai. Later he moved to Mumbai and stayed at Baloch’s house. The DCP said that Ajay was greatly influenced by the gangster’s lavish lifestyle and, therefore, he soon entered Mumbai with three other underworld fugitives—Iqbal Ibrahim Kaskar (Dawood Ibrahim’s brother), Subhash Thakur and Arif Jan (Chhota Shakeel’s brother-in-law). ) developed contact with.

Police said Ajay had also opened fire on former Haryana ministers Karan Singh Dalal and Shiv Charan Lal Sharma and Chandi Ram Gupta, a councilor from Palwal area of ​​Haryana, in 2012 for extortion. He was arrested in 2018 and released on bail around 10 months back, they said. Police said Ajay is an international Taekwondo black belt holder and has eight gold medals to his name at the national level. She also won a silver medal at the 2003 International Taekwondo Championships in Bhutan. Two years later, he finished fifth in another international Taekwondo competition in Mumbai. Police said a semi-automatic pistol and five live cartridges were recovered from him. (agency)

PM Modi will inaugurate and lay foundation stones of 23 projects worth over Rs 17,500…

Bangalore Test match will be special for Rohit Sharma, Sachin, Dhoni will be included in Kohli’s club as soon as he does this

Rohit Sharma is about to play the 400th international match of his career.new Delhi, The…

The brilliant performance of this all-rounder made ‘Lahore Qalandar’ the champion for the first time, the dream of the defending champion was shattered

-Vinay Kumar In the title match of Season-7 of Pakistan Super League (PSL 2022), the…

Buying the dip? Important funding ideas millennials ought to know to really turn out to be wealthy

By Sujith Narayanan Millennials have actually turned the foundations the other way up, particularly in…