While the autopilot mode is in controversy, so far this mode has saved many lives. Tesla often promotes this mode of its own. But till now this mode has not been able to convert the vehicle to a completely self-driving system.

Tesla’s Autopilot Mode Has Saved Many Lives So Far

The car always moves with the help of a driver. That is, the way the driver will drive the car, the car will run the same way. But if we tell you here that now the driver is not needed to drive the car, then you will definitely get a shock. But this is absolutely true. The future of the automobile industry depends on innovation and out-of-the-box thinking. From electric vehicles to park assist, every new technology has put the automobile industry a step ahead. And when we talk about new thinking or innovation in this sector, the first name that comes to mind is Tesla. Tesla is a revolution for this industry.

But recently this vehicle crashed twice, after which questions arose about its autopilot mode. In this crash, it was not known whether the driver was active during the vehicle or the car was moving on its own. But if the technology of this car is so powerful that it can run without a driver, then let’s know how its autopilot mode works and the vehicle can crash due to some mistake.

What is Tesla’s Autopilot?

Tesla’s Autopilot is a driver assisting program that turns Tesla’s electric vehicles into fully self-driving machines. That is, if the driver wants that he no longer controls the vehicle and the machine drives the vehicle on its own, then he can activate this mode and he can take rest. In its current form, the Autopilot mode allows Tesla vehicles to control speed, observe the surroundings, control, brake and park the vehicle. Explain that you have to buy Autopilot mode in a separate plan with Tesla.

This technology of Tesla works with the help of radar, ultrasonic sensors, camera and GPS. That is, this car can run even without a driver. At the same time, every Tesla vehicle made since the year 2016 comes with such controls. 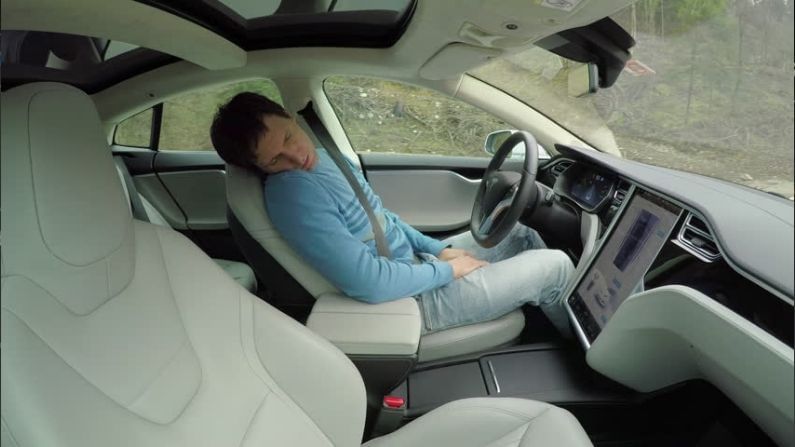 What can autopilot do?

traffic cruise control: With the help of this feature, if your vehicle is moving at one speed, then it automatically adjusts the speed and applies the brakes at a safe distance after seeing the vehicles ahead. This feature works by looking at the vehicles ahead of you.

auto steerThis feature helps in controlling all these things, considering the traffic, keep your vehicle in the same lane and do not collide with other vehicles.

Warning on hitting the side: If the car comes closer than the adjacent car while driving, then the car will alert you immediately. That is, whenever this happens, you will get an alert.

auto lane change: With the help of this feature, your car will automatically move to the other lane. So even after not getting the place many times, seeing this place, it will shift itself to another lane.

autopark: In low speed, where the space will be seen empty, this car will park the car on its own. 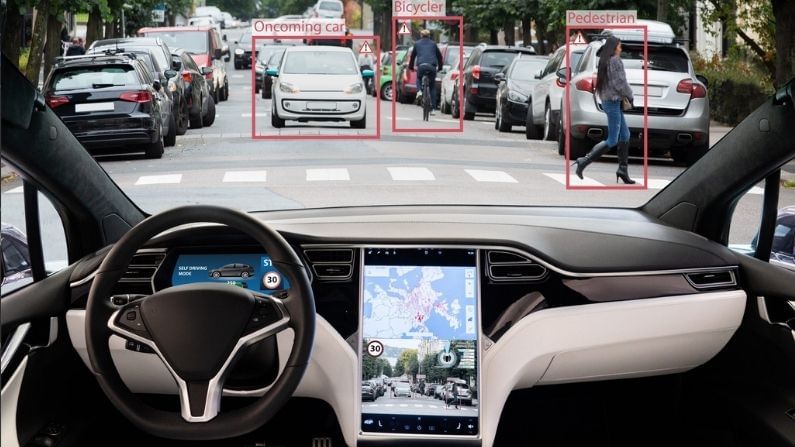 Autopilot mode works with the help of many sensors

Tesla has installed many sensors in its vehicles to make this mode work better. It has a total of 8 sensors in front and rear and side, which note everything and alert the driver immediately. At the same time, you also get a forward looking radar, with the help of which Tesla can see the car moving 160m ahead and controls itself if there is any danger from the vehicle ahead. Apart from this, you also get a sonar sensor in Tesla which works 360 degrees and detects any danger within a radius of 8 meters. That is, there is no animal or small child on the side. At the same time, with the help of GPS, it detects the road position of the vehicle.

Does this mode make Tesla a fully self-driving vehicle?

At present, Tesla has not been able to fully convert the vehicle to the Selfie Driving System by Autopilot. Apart from this, it can be called Level 2 Automated System. This means that Tesla vehicles can control speed control and steering control but cannot control your vehicle completely. That is, you can leave it to drive itself but there should always be a person in the driver’s seat because till now it has not been 100% foolproof.

Recently, there have been many controversies regarding Tesla, in which its Autopilot is at the top. That is, the car has also crashed many times, but till now it is not known whether the vehicle was on autopilot or the driver was driving during that time. At the same time, a video of Norway is going viral today in which a driver was driving drunk. In such a situation, the vehicle was on autopilot and immediately Tesla detected it and saved the life of the driver. The car slowed down on its own and stopped on the side.

Hey @elonmusk you might want to have your team look into the moon tricking the autopilot system. The car thinks the moon is a yellow traffic light and wanted to keep slowing down. 🤦🏼 @Teslarati @teslaownersSV @TeslaJoy pic.twitter.com/6iPEsLAudD

At the same time, earlier a video went viral in which Tesla running on the road would detect the moon in the sky and considering it as a traffic light, it repeatedly issues alerts to the driver to slow down the vehicle. But apart from this, the popularity of this vehicle can be gauged from the fact that, today Tesla sales are at the top in the world and many people are buying it. At the same time, company owner Elon Musk is working hard to launch Tesla Model 3 in India. His talk about setting up a showroom and plant has also been confirmed, but at present talks are going on with the government regarding the tax on the vehicle.

Tata Tiago NRG launched at an initial price of 6.57 lakhs, is already number one in terms of safety

After all, why KIA Motors cars are special, Seltos, Sonet and Carnival sold more than 1 lakh in just 6 months

Bhagyashree Soni is a software engineer with soft writing skills. She is a degree holder from the International School of Entrepreneurial Leadership. She has been a state-level badminton champion and chess player. A woman with a forthright attitude enjoys her writing passion as her chosen career. Writing in the context of feminism, social cause and entrepreneurship is her forte.
Articles: 1727