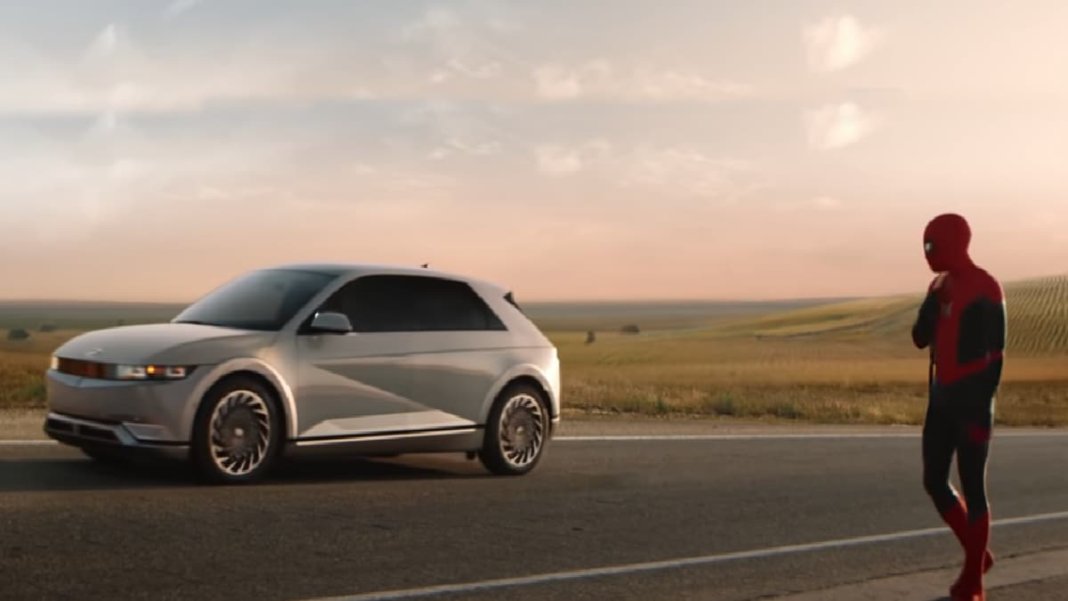 Hyundai Ioniq 5 may soon make its presence felt in India. Recently this car was seen running on the roads in India. Now, another latest and interesting news related to this car has come to the fore, where you can see Spider-Man riding an Ioniq 5 in the latest Hyundai USA advertisement. Let us tell you that on December 16, Marvel’s superhero film Spider-man: No Way Home is going to be released and for this Hyundai has released a TV commercial joining hands with the film franchise. The car has also been shown in the global market and all its specifications have also been exposed. The company has given a battery pack of 77.4kWh capacity in this car, about which the company claims that it can get a range of up to 460 km in a single charge. So without delay, let us know what is so special about this TV commercial.

Hyundai USA has shared a TV commercial on YouTube, in which you can see Spider-Man on the Ioniq 5. This commercial humorously shows the link between the previous Spider-Man: Far From Home and the upcoming Spider-man: No Way Home movie. The commercial opens with Spider-Man in a hotel hiding from the world. If you haven’t seen the previous film, let us tell you that in ‘Far From Home’ Spider-Man fought a villain named Mysterio, but in this Spider-Man’s identity was exposed. The story goes further in the upcoming movie, where Spider-Man enlists the help of Doctor Strange to hide his identity back, but things go awry in the process.

The new ad traces the same story, where Spider-Man leaves the hotel to go somewhere and comes out to find that there are no buildings or poles in the distance to help him swing through the net. He starts walking on the road and his friend brings Ioniq from behind. Spider-Man sits in this electric car and his friend starts counting the features of the car. Spider-Man then uses the navigation feature in the car’s infotainment system and enters a location, which could be the location of Doctor Strange’s home. Fans are going to like this commercial a lot. You can watch this commercial below.

Talking about the Ioniq 5, it is Hyundai’s most premium electric car. Not only does it look modern and beautiful, but its power will not make you feel that it is an electric car. The company has given a battery pack of 77.4kWh capacity in this car, about which the company claims that it can get a range of up to 460 km in a single charge. Another feature of this is its charging capability. The company claims that this car can be charged from 10 to 80 percent in just 18 minutes and just 5 minutes of charging can run this electric car for 100 kilometers. These are certainly impressive figures.

Not only the range, its power also affects it. The Hyundai Ioniq 5 crossover gets two trims. The single motor trim generates 225 hp and 258 lb-ft of max torque and the company claims this helps the car to accelerate from 0-100 km/h in 7.4 seconds. There is also an all-wheel drive trim, which comes with a dual-motor setup. This trim produces 302 hp and 446 lb-ft of output and can accelerate from 0-100 km/h in just 5.2 seconds. Its top trim will have a top speed of 185 km/h.

Talking about other attractive features of the car, it gets a 12-inch touchscreen system and the gear selector is given behind the steering wheel. In this crossover model, the company has given pop up door handles, huge black roof and beautiful 20-inch alloy wheels.<!–

Cummins gave advice to his players, said- ‘Focus on your own work instead of sledging’

Why The Casino Industry Is Big Business in India

UP Election 2022: Yogi-Modi, Akhilesh and Priyanka, including everyone, put their strength for the UP elections, but where is Mayawati in the election season?