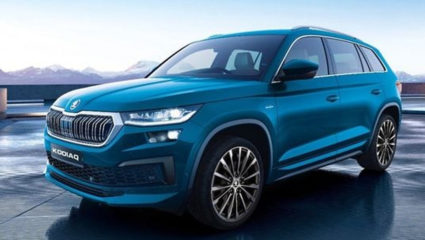 Skoda has launched the 2022 Kodiaq in India at Rs 34.99 lakh (ex-showroom). After being absent from the Indian market for two years, the car is set to re-enter with only a petrol powertrain. The car will be available in three variants including the three-row SUV style, Sportline and Laurin and Clement trim levels.

The pre-facelift model also had levels in styling and Laurin and Chalmers trims. The Sportline, which is entering India for the first time, has an aggressive, sporty look coupled with dark trim elements that make the car attractive.

Globally, the Kodiaq also gets a 9.2-inch infotainment screen, which could be offered here as well. Unlike the outgoing model, which was diesel only, the Kodiaq facelift will only be available with a petrol engine this time around. It is powered by a 190-hp, 2.0-litre petrol engine shared with the Octavia, and is mated to a 7-speed dual-clutch automatic gearbox. Unlike the sedans, which are two-wheel drive, the Kodiaq will get all-wheel drive as standard.

Weather Updates: It will rain for the next five days in these states of the country, IMD issued an alert

These advertisements have a big hand in selling 27 lakh cars of Maruti 800, you will also believe by watching VIDEO

OnePlus launches new TV in a budget of 22,000 rupees, know what is special in it