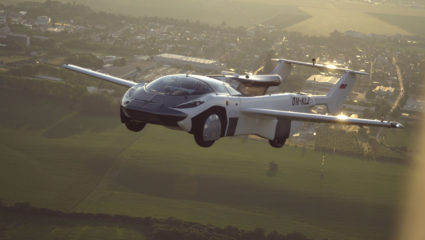 New Delhi. Whenever you get a chance and if you go to Slovakia, you will soon see a car flying in the sky. Where trials are going on in many countries regarding the flying car. For many countries, it is still a dream, but Slovakia is now fully ready to fly its car in the air.

This flying car has been named as Air Car. It will run on the ground as well as fly in the sky. At the same time, AirCar has also got permission for free circulation in Slovakia. This vehicle of car-aircraft concept can reach a top speed of up to 170 km/h. Now this futuristic car is ready to be made. Hybrid vehicle AirCar turns from car to airplane in two minutes.

An air vehicle is made in just 3 minutes

Kleinvisional also posted a video of the air car on its YouTube channel. This video went viral on social media. It can be seen in this video that it first converts from a car to an aircraft and then after landing is also seen running on the road.

From the view of the vehicle, due to the wings mounted on both sides, a BMW engine and a rear wing, the flying car can takeoff smoothly like a real plane. The two-seat model weighs 1,100 kg and can carry an additional 200 kg per flight. Now the Slovakia Transport Authority has given Klein Vision the necessary permission to fly this AirCar.

In terms of speed, this car can go up to 2500 meters and its top speed is 170 km/h. According to the company, this air car can take off from the ground to the sky with a takeoff set at 300 meters and a speed of up to 200 kilometers per hour. The special thing is that it runs on gasoline. Its manufacturer also expects the speed range to go up to 1000 kms when it goes into mass production. However, you will need to have a pilot’s license to fly it.

So far 70 minutes of flight testing and more than 200 takeoff and landing tests have been done on AirCar. At the same time, the company said that with AirCar getting the certification, the way for mass production has also been cleared. People will now get a great efficient flying car.

Another big thing, now the manufacturer is going to conduct a flight from Paris to London soon. Other companies are also developing flying and driving cars. It also includes the eVTOL concept. However, it will still take a long time for it to reach the general public.

Investment of P-Notes at the peak of 40 months, foreign investors showered money on the Indian market

There is a steady increase in investment through P-notes.There has been a significant increase in…

As soon as the rain stopped, the kite-flyers showed their passion; The city sky was occupied by kites till evening

File Photo Nagpur. Kite flying is done fiercely in the city on Makar Sankranti. This…

‘There’s a buzz in the air:’ BPS school year kicks off with new set of challenges, goals

“Are you ready to learn today?” Mattahunt Elementary Principal Walter Henderson bellowed out via a…

Ambergris: Fishermen found ‘floating gold’ in Yemen, this treasure of crores found in the sea changed their fate

Ambergris is also called ‘vomit gold’, which means vomit of whale fish. It may sound…