Royal Enfield is constantly making changes in its bikes. The company has recently tested the updated version of the Himalayan where the leaked images reveal many features of the vehicle.

Royal Enfield plans 4 new launches every year. From the year 2020 till now, the company has tested many of its bikes. In such a situation, the pictures of the new test can excite you because in it the Himalayan is shown in a new form. Let us tell you that the Himalayan was updated in February this year where the company also sold many of this new model. But now it is heard that another updated version of the Royal Enfield Himalayan is under development.

The leaked images have revealed that the core design of the Himalayan remains the same but with many changes. This motorcycle is said to be a road based variant. It is clearly visible in the photos that have come out during the test that, on the front side, the company has used small tires in it. The standard Himalayan comes with a 21-inch front tyre which gives you an immersive off-roading experience. The advantage of big tires is that if you are traveling in a mountainous area, then it can come out of any way and takes you to your destination. 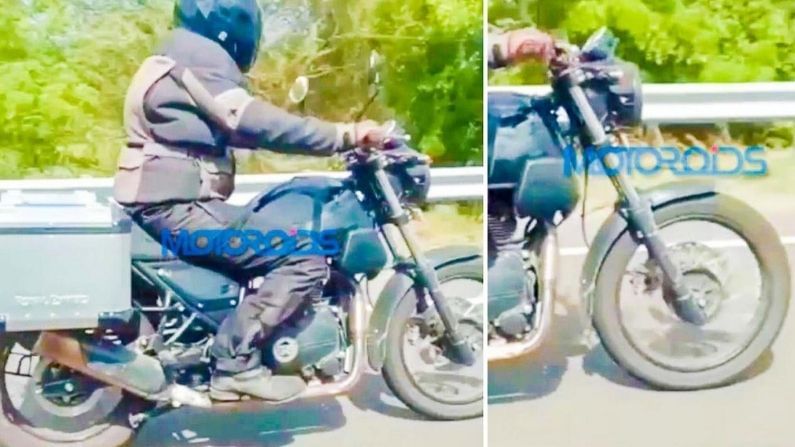 It was also seen in the leaked pictures that this bike did not have windscreen and fork getters. This clearly shows that Royal Enfield is working on a road based variant. The new model is likely to attract a lot of customers who are looking for better road riding dynamics.

In terms of visual changes, Royal Enfield is here testing the 411cc engine through an updated version. The company is constantly making changes in its bikes and is paying a lot of attention to the features, engine as well as the hardware. Strong performance and smooth ride will be available in the new Himalayan. Talking about the 411cc engine, it comes with a single cylinder, air-cooled motor that makes 25.3bhp power at 6500rpm and 32Nm torque at 4000rpm. It comes with a 5 speed gearbox.

Royal Enfield is testing the 650cc engine of the Himalayan here. But according to the report, this model is currently being tested at the UK’s Facility Center. Let us tell you that the engine of the road based version is not of 650cc but 411cc unit has been installed in it. In such a situation, many changes can be made in Royal Enfield in the coming time, which will be revealed gradually.

From Ola electric scooter to 2021 RE Classic 350, these cool scooters and bikes will be launched in August

Bhagyashree Soni is a software engineer with soft writing skills. She is a degree holder from the International School of Entrepreneurial Leadership. She has been a state-level badminton champion and chess player. A woman with a forthright attitude enjoys her writing passion as her chosen career. Writing in the context of feminism, social cause and entrepreneurship is her forte.
Articles: 1727